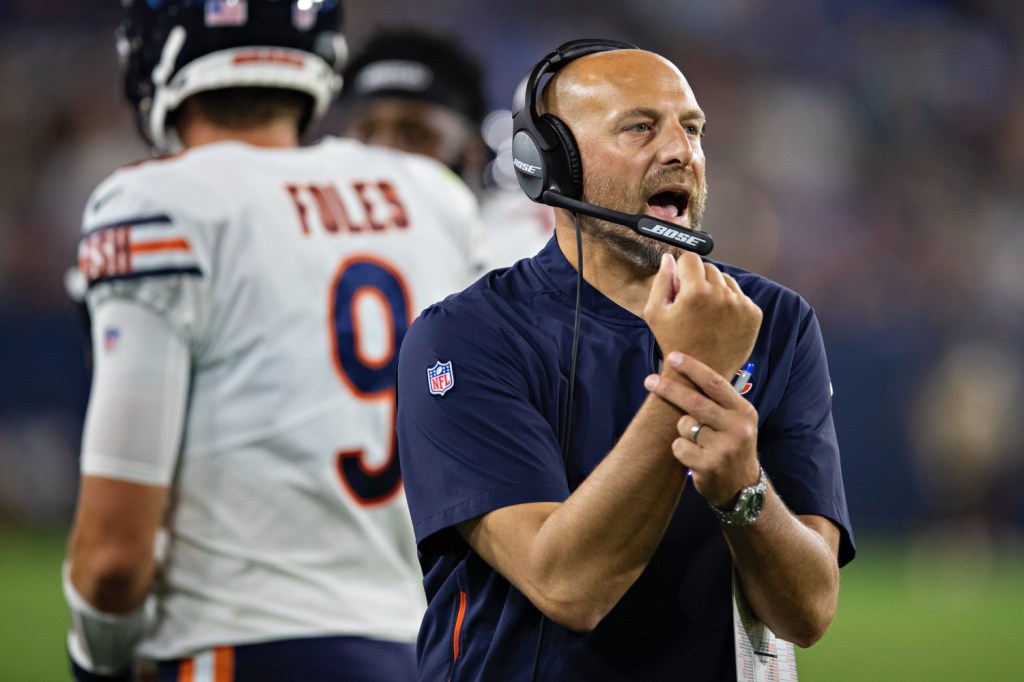 It’s kind of a miracle that Chicago Bears head coach Matt Nagy still has a job. The Bears have lost four games in a row. Chicago’s offense ranks 2nd to last in the NFL in Yards Per Game, 2nd to last in total yards, and 4th worst in points scored. The Bears defense is solid but Matt Nagy’s supposed to be this ‘offensive guru’, at least that’s what the fans were told, and that couldn’t be further from the truth. That’s why seeing him getting roasted on social media (below) is pretty enjoyable.

Instead of taking responsibility for his team’s offensive woes like a great leader would, Matt Nagy instead chose to spread the blame around to every single person on his team. He told reporters “it’s no one’s fault other than everybody’s” which is sure to help with locker room morale.

Matt Nagy then used a little re-direction and changed the topic of conversation to defending the NFL’s horrendous taunting rule. The league’s awful Taunting Rule and haphazard enforcement of that rule has been the worst part of this NFL season. Matt’s comments about the taunting rule are completely laughable. The rule is an abomination:

“People watch, and people want to see a little bit of respect and a little bit of doing things the right way. It doesn’t mean you can’t have fun, but there’s young kids right now that are watching games, and what happens is you go to one of these sporting events and you might see some imitation going on that’s taking it over the top. I’m a firm believer in respect and just kids growing and watching and we have a huge platform as leaders. Players and coaches. Let’s understand what the rules are, let’d do it the right way. Let’s still have fun — these guys are still having fun and not taunting. You can still have a great time. But let’s stay within the rules as we do it.”

Ah, yes, ‘kids are watching’ so players shouldn’t be allowed to celebrate when facing a certain direction on the field. That’s such a laughably trash take I’ll just stop now and let these Twitter reactions to Matt Nagy’s comments.

Matt Nagy when he catches one of his players showing a little too much excitement after a successful play pic.twitter.com/KguajuJvlI

Matt Nagy just might have what it takes to be a high school football coach.

Everyone to Matt Nagy: pic.twitter.com/2zBMmTfOGD

😂😂 the “but the kids” arguments are so lame. We grew up with segments highlighting vicious hits that knocked out players. Are we going around our daily lives trucking random people because we saw it on jacked up? https://t.co/NgrReqdQsp

My son barely watches football yet he’s super competitive and enjoys a good celebration when playing with his friends. Couldn’t imagine what would happen to his celebrations if he saw Marsh take 3 steps towards the Steelers bench after a sack.

I’d rather my son not watching Nagy’s offense. That’s a worse example of football than a taunting penalty.

Someone tell Matt Nagy to coach his football team better and stop worrying about BS taunting, which has been egregiously called this season. https://t.co/dteSkDExXR

I’m a firm believer that Nagy does not understand today’s game, and probably doesn’t HAVE the respect of his players

I'm a firm believer Matt Nagy will be unemployed at the end of this season.

From where I’m sitting, it feels like there are multiple reasons for Nagy to come out and defend a rule that’s universally despised by football fans. It’s possible he’s trying to appear more favorable to league administrators because he might be in search of a new job in the very near future. It’s also possible he’s just trying to change the conversation from discussing his failures as an NFL head coach to people talking about his awful takes.

The Chicago Bears face the Baltimore Ravens on Sunday and then they travel to Detroit to play the winless Lions on Thanksgiving. Matt Nagy has already beaten the Lions once this season and looking at the schedule it’s sad that (1) NFL fans will be forced to watch that game on Thanksgiving and (2) a potential Nagy win over the Lions will just delay the inevitable and keep him on the hot seat for another week.