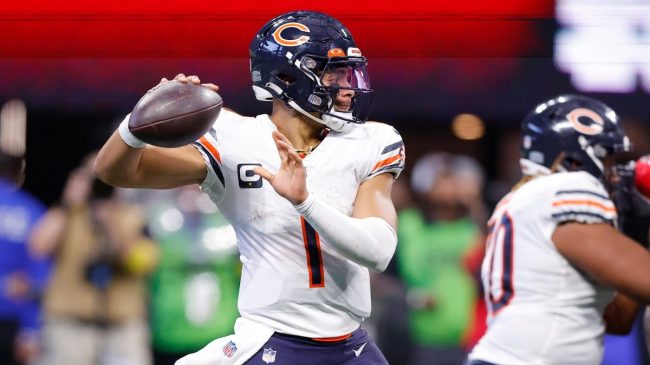 The Chicago Bears offense has received a jolt of electricity with Justin Fields balling out lately. However, they haven’t been able to capitalize on wins just yet. During the contest against the Atlanta Falcons, it appeared Fields suffered a minor shoulder injury. Now, it sounds like the situation could be much more serious than previously believed.

According to Ian Rapoport, the Bears’ quarterback “suffered a left shoulder dislocation.” Justin Fields played through the injury, making him an incredibly tough guy. Even so, his “day-to-day” status could alter depending on the direction of his recovery.

#Bears QB Justin Fields suffered a left shoulder dislocation, sources say, a painful injury he somehow played through on Sunday. Coach Matt Eberflus described Fields as “day-to-day.” His status for this Sunday is still to be determined.

This is impeccable timing for Chicago. The most important thing for Justin Fields right now is to keep playing and developing his game. That’s hard to do with a shoulder dislocation. We’ll see how the Bears go about the situation, but the fans definitely have the future in mind.

On one hand, Chicago could have Justin Fields play through the injury. Meanwhile, another option is to let him rest as he’s a long-term investment. We’ll see what route the Bears go but the fans have some ideas of their own.

A Packers fan would want Justin Fields to sit out… But it’s also a smart decision.

I’d rest him. No point in risking it for him long term.

Nobody expected the Bears to be competitive this season, so might as well play for 2023 and beyond.

Keep an eye on the Bears as they should come up with a decision for their quarterback soon. Chicago is a long shot to make the playoffs at this point, so sitting him might be the smart play. We’ll see what the decision will be, as there is always a chance Justin Fields plays through the injury as well.