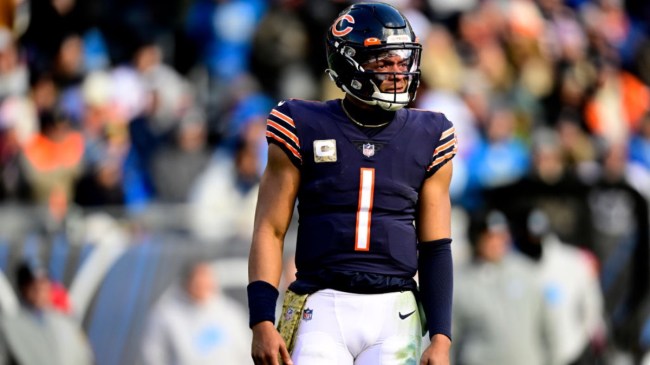 Over the past few weeks, Chicago Bears fans have been reminded why their team was willing to make such a big investment in Justin Fields last year.

The Bears traded a pair of first round picks to the New York Giants to take Fields with the 11th pick in the 2021 NFL Draft. Unfortunately, the move didn’t look like it was going to work out early on in Fields’ career.

Fields struggled as a rookie, throwing for just 1870 yards in 10 starts and posting a touchdown to interception ratio under 1.

A lot of the blame for his struggles fell on the coaching staff, but the expectation was that he would improve in year 2 with new coaches. Those improvements didn’t come early in the year, with the offense being held under 20 points 4 times in their first 6 games.

Then things started to turn around at the end of October. Over the Bears’ last 3 games Fields has showed the impact he can have on a game despite the team falling short in each game.

In those 3 games, Fields has thrown for 441 yards and 7 touchdowns while adding 385 rushing yards and 4 touchdowns on 36 carries.

While the 3 games have shown clear improvement for Fields and the Bears offense, it seems they have also taken their toll on the young quarterback.

Yesterday, Fields said he’ll be “tapering back” at practice because his legs felt heavy after Sunday’s game agains the Lions.

Justin Fields says he'll be "tapering back" at practice this week. "My legs just felt heavy after the game. The guys on the strength staff said my (work)load has been pretty high." He has 28 rushes the last 2 weeks.@cbschicago pic.twitter.com/Ql5tFRIgK3

The Bears are in a weird spot right now. It’s clear that the offense is at its best when Fields can use his legs to create opportunities, but you also don’t want to see him take the hits that come with running the ball more than 10 times per game when your team isn’t in playoff contention.

Maybe they’ll see if they can get him throwing the ball more down the stretch now that they got him some help at receiver at the trade deadline.