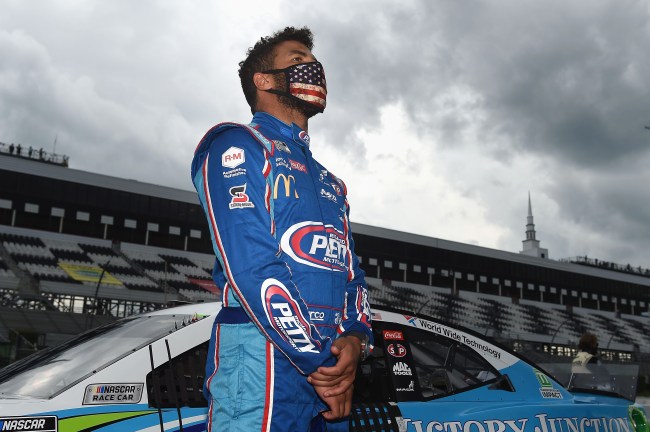 Bubba Wallace has had a pretty eventful Monday that began with an attack from the President and ended with an endorsement deal from a company that has his back.

On Monday morning, President Donald Trump took a shot at the NASCAR driver, accusing Wallace of a “hoax” after a suspected noose was found hanging in his garage at Alabama’s Talladega Superspeedway a couple of weeks ago. The President also criticized NASCAR for banning the Confederate flag in his Tweet early Monday morning.

Has @BubbaWallace apologized to all of those great NASCAR drivers & officials who came to his aid, stood by his side, & were willing to sacrifice everything for him, only to find out that the whole thing was just another HOAX? That & Flag decision has caused lowest ratings EVER!

Later on Monday night, Beats By Dre announced that they had signed Wallace to an endorsement deal and immediately fired back at Trump over his tweet earlier in the day.

We weren’t going to announce this until later this week, but hate cannot win the day,”. “No one should ever be asked to apologize for standing up for what’s right — we are proud to welcome Bubba Wallace to the Beats by Dr. Dre family.”

We weren’t going to announce this until later this week, but hate cannot win the day. No one should ever be asked to apologize for standing up for what’s right — we are proud to welcome @bubbawallace to the Beats by Dr. Dre family. pic.twitter.com/HeiC76MDle

Wallace also responded to Trump’s tweet which got LeBron’s support.

Right HERE too with you!! As well as the next generation who follows in my foot steps! Kings and Queens https://t.co/6rO5cex3ed

Your words and actions will always be held to a higher standard than others,” Wallace wrote. “You don’t learn these things in school. You learn them from trials and tribulations, the ups and downs this crazy world provides. You will always have people testing you. Seeing if they can knock you off your pedestal. I encourage you to keep your head held high and walk proudly on the path you’ve chosen.”