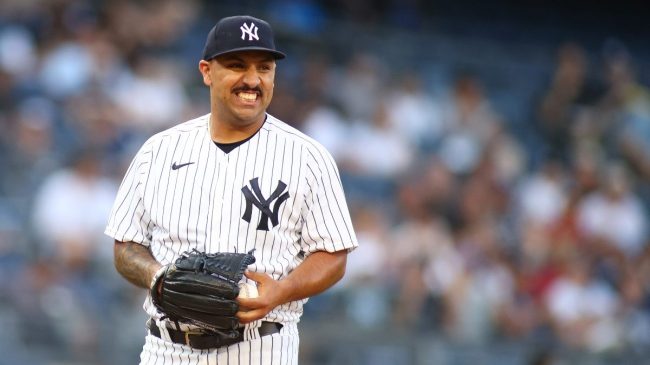 The New York Yankees clinched a playoff berth on Tuesday night after defeating the Toronto Blue Jays 5-2. This team has looked solid throughout most of the season and they now prepare themselves for an October run. However, while celebrating, someone was caught pouring beer down Nestor Cortes’ pants and it’s the weirdest thing you’ll see today.

Talkin’ Yanks share the clip as the camera quickly scopes through the Yankees’ locker room. Nestor Cortes is seen wearing goggles, soaking wet from champagne flying everywhere. Then, things take a drastic turn when a mysterious hand pours a full beer down his pants.

WHO POURED THE BEER DOWN NESTOR'S PANTS pic.twitter.com/vqXXghBERd

How does the reporter talking over the clip not notice what’s going on? It happens right there in our faces. You can even see Nestor Cortes’ mouth drop in shock if you pause the clip at the right time.

Nobody knows which teammate is the culprit. For now, it’s a total mystery, as the Yankees pitcher is the victim of someone’s hilarious antics. However, it’s not stopping fans from guessing who poured the beer down his pants.

The rules are the rules.

Bader. And if I’m right, y’all have to follow me.

It was cole : “ so you think you’re the number one man in the rotation..smartass” 😂👀

We may never know who poured the beer, but at least we have the hilarious clip available. The Yankees have a great shot at making a run for the World Series. If they end up winning the championship, who knows what could be in store for Nestor Cortes during the celebration?