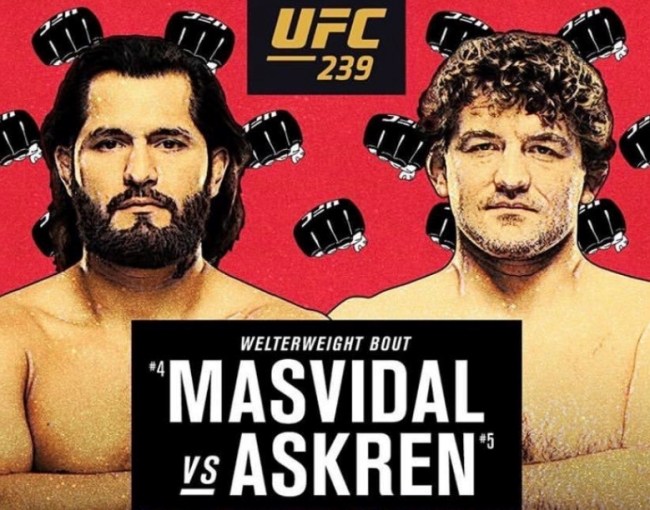 Sarcasm and sharp wit are never far away when “Funky” Ben Askren is around. The UFC welterweight is always quick with a biting comeback or one of his signature “Boom Roasted” jokes.

A free spirit who tells it like it is, Askren has become one of the UFC’s hottest commodities of late. He’s the antithesis of the macho enforcers and the aggressive trash talkers, and has found a niche relating to, and connecting with, the MMA audience in a way that no fighter has ever done before. And despite just one single fight inside the Octagon to his name, Askren could be on the verge of a title shot if things go his way at UFC 239.

First, however, he’ll need to get past Jorge “Gamebred” Masvidal on the Pay Per View main card on ESPN+.

Scheduled as the UFC 239 featured bout (that means third to last), the “Funky” vs. Masvidal fight is one of those classic striker-versus-grappler matchups, but this particular battle pits Askren’s Olympic-caliber wrestling against the backyard brawling tactics that transformed “Gamebred” from a former contemporary of the late “Kimbo” Slice into a mixed martial arts mainstay. It’s basically the most extreme possible version of parallel opposites inside the Octagon.

While their fighting styles vary greatly, Askren and Masvidal have found some synergy in the one liner department. And as “Funky” continues his “Boom Roasted” barbs, “Gamebred” broke the internet, or at least MMA Twitter, earlier this year with his “three piece and a soda line,” after a backstage altercation with Leon Edwards in London.

A known consumer of fast food, Masvidal translated his love of fried chicken into a jab-cross-hook combo. Askren appreciated the humor, even finding the one liner rather clever, but admits that there’s no super value meal that can stop his world class wrestling. Actually, he went even further explaining that Masvidal’s hunger for vengeance and thirst for blood would not be able to handle what Askren would be serving up at UFC 239, something akin to “a big ole’ full meal of some sort that he just can’t finish the whole thing. He might give it a good try, but he can’t get it done.”

Doing media rounds in L.A. the week before UFC 239, the undefeated Askren has shown little regard for Masvidal’s threats and social media taunts. Truth is, Masvidal is a natural born killer, he’s “bout that life,” as some would say, but none of the antics are causing concern in Askren’s camp. On the contrary. The flip-flopped “Funky” is focused on doing his job and returning to Wisconsin, where he owns several wrestling academies and regularly plays disc golf. He’s certain that his nonchalance has aggravated Masvidal to no end.

“If I cared or worried about what everyone thought about me, I’d probably have a pretty stressful life. I’m too busy for that. I’ve got a lot … going on,” comments Askren. “I mean you’re in a very mentally weak state if you think every little thing affects you, and that’s where he is right now.”

Askren, who currently sits at number five in the welterweight rankings, also believes that despite Masvidal’s fourth ranking, “Gamebred” is nowhere near the toughest opponent he’s ever faced. Coming off a controversial win over Robbie Lawler in March, Askren is vocal about where he rates Masvidal.

“Who’s better than Jorge? I think Robbie Lawler is. I think Douglas Lima is,” states Askren, then continuing. “I think Andrei Koreshkov is and probably … Jay Hieron maybe.”

Certainly Askren is throwing out names, hoping that the report finds its way back to Masvidal’s camp, but “Funky” is just “being genuine and honest, and giving everyone my opinion.” He’s also quick to add that “I think a lot of MMA fighters, they have in my opinion, too much bravado. They want to act tough and it shows that it’s kind of inauthentic.”

Once again Ben Askren is using his subversive verbal attack to poke away at Masvidal’s tough, street-savvy persona. It’s another example of why he’s become such an icon in such a short time, highly regarded by both the fans and fighters alike, many of whom grew up watching Askren’s NCAA championship performances.

“I feel like I’m one of the old guys and a lot of these kids … they probably came up watching me wrestle, looking up to me,” adds Askren. “Not all of them are willing to say it, but a lot of them probably do because there are a lot of wrestlers in the sport.”

Masvidal clearly doesn’t fall into this category, which means there will be no love lost when they lock horns on the UFC 239 Pay Per View main card on ESPN+.