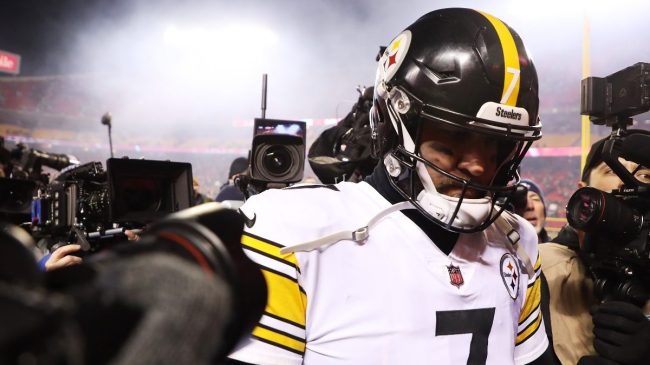 The Pittsburgh Steelers are in a weird situation right now. Defensively, they’ve played great so far this season. However, the offense has looked poor, to say the least. It’s been so bad that the fans were booing Mitch Trubisky and chanting for Kenny Pickett to take the field. Now, Ben Roethlisberger weighs in on the quarterback situation.

It’s easy to blame the quarterback when things aren’t working out. However, there are several factors that could be in play. Especially considering the Steelers might just have the worst offensive line in the league right now. With that in mind, Ben Roethlisberger explains why he disagrees with the fans booing Mitch Trubisky.

The Steelers legendary quarterback claims, “They started chanting Kenny, and I just I don’t think it is fair that it happened to Mitch today because I wouldn’t blame Mitch for the performance today. I don’t think that he deserved the fans getting on him today because sometimes you’re playing within the system,” per Sports Illustrated.

Pittsburgh’s entire offense hasn’t looked great. Najee Harris has had little room to run and Trubisky hasn’t had much time in the pocket to find the open man. Regardless, the Steelers used a first-round draft pick to select Kenny Pickett and the fans are drooling at the bit to see him in action.

We’ll see how the rest of the season plays out. Pittsburgh has remained close with their opponents so far as they currently have a 1-1 record. Look for the offense to possibly get rolling, especially once Najee Harris can find some wiggle room.