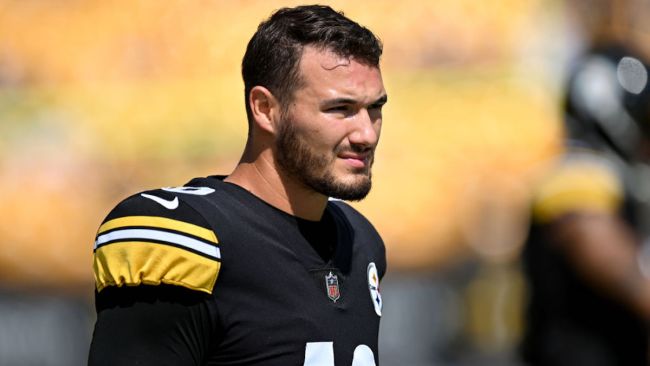 Despite leading the team to a Week 1 victory over the defending AFC champion Cincinnati Bengals, Pittsburgh Steelers fans haven’t necessarily warmed up to starting quarterback Mitch Trubisky, as Acrisure Stadium rang out with chants for Kenny Pickett, Trubisky’s rookie backup, on Sunday.

At home against a New England Patriots team that got absolutely dominated by the Miami Dolphins the week before, the Steelers mustered just 14 points and one touchdown. Perhaps unsurprisingly, the team’s offensive ineptitude led to fans calling for Pickett, who the Steelers drafted out of the University of Pittsburgh with the 20th overall pick in the 2022 NFL Draft.

Speaking to reporters following the loss, (current) starter Mitch Trubisky — who completed 21 of 33 passes for 168 yards, a touchdown, and an interception — discussed how it feels to have his own fanbase calling for a rookie to take his job and obviously handled the situation with class.

“It is what it is,” Trubisky said, according to the Pittsburgh Post-Gazette. “You just block it out and continue to play football.”

The Steelers will have an opportunity to right this ship in just a few days when they take on the Cleveland Browns — who are also 1-1 and are likely reeling following one of the most pathetic collapses in NFL history — for Thursday Night Football.

If Trubisky doesn’t perform in that game, though, expect the calls for Pickett to become even louder as fans will likely be expecting the team to compete for a playoff berth this year. It’s not like Pickett is necessarily a raw kid, either, as he’s actually 24 years old following a five-year college career at Pittsburgh.