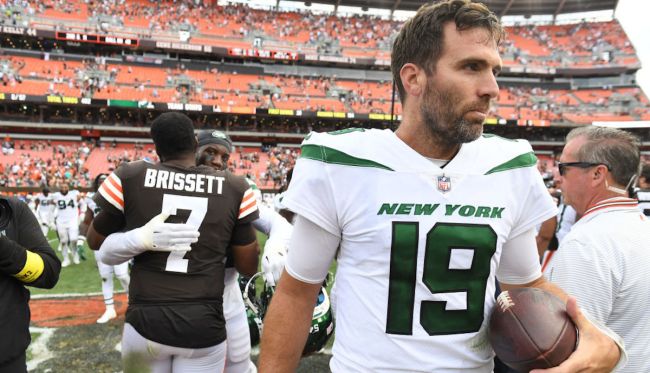 Down 13 points with less than two minutes to play, the New York Jets were on the verge of beginning the 2022 season with and 0-2 record. Luckily for Gang Green, though, they were playing against perhaps the only NFL franchise with worse karma than them: the Cleveland Brown.

Already an infamous novel of calamity, the dark cloud covering Cleveland has only darkened in recent months following their acquisition of alleged creep Deshaun Watson and the fanbase’s subsequent and overly aggressive embrace of their new quarterback. Case in point: the group of Browns fans seen at the tailgate with a wildly offensive mannequin sporting a sign that said “Happy endings are not illegal.”

As a result of all of the bad juju that Cleveland has piled up in 2022, they found themselves on the wrong side of one of the most improbably collapses in recent NFL history, losing 31-30 to the Jets after taking a 30-17 lead with 1:55 to play.

According to ESPN Stats & Info, until Cleveland’s loss today, NFL teams had won “2,229 consecutive games when leading by at least 13 points in the final 2 minutes”, with the last team to blow such a lead being the 2001 Browns. To make matters worse, prior to the loss, Joe Flacco had not won a road game since 2019 while the Jets had lost their previous 13 games in September. Then they played the Browns.

NFL teams had won the last 2,229 consecutive games when leading by at least 13 points in the final 2 minutes.

The last team to blow such a lead? The Browns in week 9 of the 2001 season vs the Bears. pic.twitter.com/x0PfP27auh

Given the historic nature of the loss, Browns fans and NFL fans in general hopped on Twitter to both clown on the Browns and to call for the head of either defensive coordinator Joe Woods or head coach Kevin Stefanski.

Hilarious collapse for the Browns.

Couldn’t have happened to a more deserving team.

That’s what that scumbag franchise gets for giving Deshaun Watson a quarter of a billion dollars.

I choose to view this as the Almighty rightly punishing Jimmy Haslam and the Browns for signing DeShaun Watson to guaranteed money even if suspended after he was credibly accused of assaulting well over twenty women, and I, for one, am HERE FOR IT. https://t.co/IAXKOCUnbs

The Cleveland Browns—the front office, the team, the fans—are truly the worst. Don't like the Packers, but they at least are not vile like the Browns. As long as Deshaun Watson is an employee of the team, and everyone who supported him remains, I will relish every Browns' loss. https://t.co/0OzDazDe5d

Me going into every game thinking this time it will be different with Joe Woods. pic.twitter.com/OQLj6YDVMj

Joe Woods might have to lose his job tomorrow.

Absolutely disgusting the Browns lost that game to the Jets. I am PISSED. Joe Woods needs to be fired immediately 🤬 pic.twitter.com/F5q7kQDO9b

This is on Jeff Howard, Joe Woods, and the entire secondary. #Browns

The Browns will look to rebound in just a few days when they take on the Pittsburgh Steelers for Thursday Night Football.