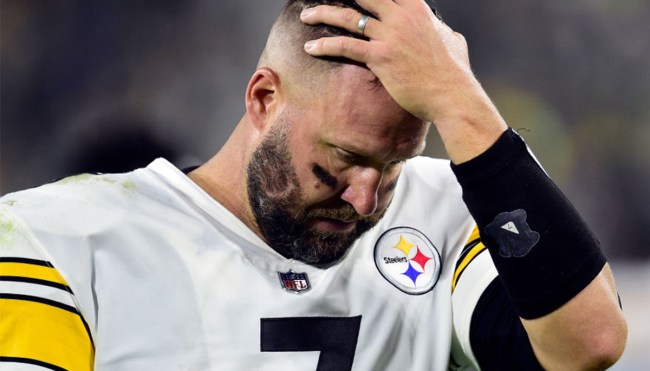 Last week, longtime Pittsburgh Steelers quarterback Ben Roethlisberger hinted that this weekend’s matchup versus Cleveland is likely his last in Heinz Field. After struggling through a .500 season, the passer is leaning towards hanging up the cleats and retiring after the season’s conclusion.

While this year hasn’t yielded the results that the Steelers had hoped for, Roethlisberger’s legacy in Pittsburgh is forever cemented. He was selected in the first round of the 2004 NFL Draft, spending each of his 18 seasons in the Steel City.

Over that time, he helped lead the Steelers to two Super Bowl titles and 11 playoff appearances. Roethlisberger won his first 14 starts in Pittsburgh, and never looked back after taking over under center as an NFL rookie.

With his playing time soon coming to an end, the Pittsburgh Post-Gazette attempted to honor the legendary signal caller for a Hall of Fame career. Unfortunately, a poorly placed advertisement ruined his send-off. Check it out below.

The Post-Gazette today sold its whole Sunday front page as an ad (an honor to Ben Roethlisberger) and then sold an ad sticker that covered up the honoree’s name pic.twitter.com/H3H46Wz3fE

see, this is why making fake front pages then putting stickers on them is a bad idea pic.twitter.com/XQ7wVO3kr7

This blunder is now gaining traffic for the wrong reasons on what was supposed to be an honor for an All-Pro player. All ads aside, Roethlisberger will lead the Steelers into Heinz Field one last time as he looks to take down the rival Cleveland Browns on Monday night. A win would keep Pittsburgh’s slim playoff hopes alive heading into the final week of the regular season.