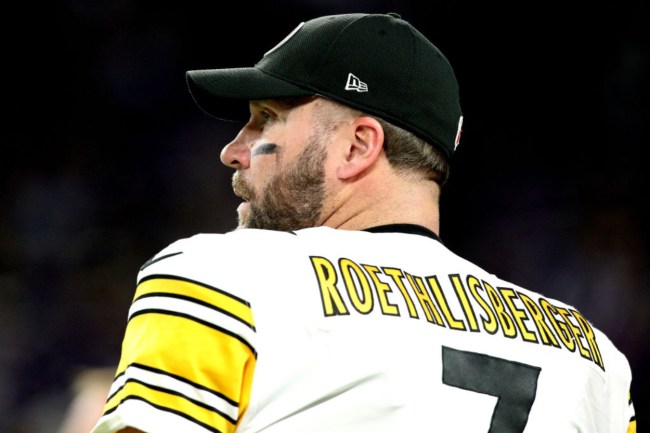 Even prior to the start of the NFL season the rumors and speculation were swirling about this being Ben Roethlisberger’s final campaign, either in general or as a Pittsburgh Steeler.

Now, with two games left on the regular-season schedule, reality is starting to sink in for Roethlisberger and it sounds like he’ll be calling it quits at the end of the year.

On Thursday morning, the 39-year-old admitted that Monday night’s game against the Cleveland Browns is “likely” his final home game. This marked the first time Roethlisberger has publicly admitted that he could retire at seasons end.

BREAKING; Ben Roethlisberger said today that Monday night’s game against the Cleveland Browns is likely his final game at Heinz Field, his first public indication he will retire after the season.

“I don’t ever speak in guarantees, but signs are pointing that way that this could be it,” Roethlisberger said, according to Steelers reporter Teressa Varley. “The emotions have started to kick in. But I am able to put them on the back burner.”

That certainly sounds like a man that’s made up his mind. Following these comments, it would be much more surprising to see Roethlisberger hang around for another year and not hang ’em up.

Roethlisberger’s 18th year in the league hasn’t been his best, to put it lightly. The two-time Super Bowl champ hasn’t looked comfortable, or overly capable to be fair, at many points this season. He’s thrown for just under 3,400 yards, 20 touchdowns, and eight interceptions while the Steelers sit at 7-7-1 on the year.

After Roethlisberger’s public admissions about possibly retiring, it’s safe to say that he’ll receive quite the ovation on Monday night when he takes the field against Cleveland.

The NFL world offered up their reactions to Roethlisberger’s comments on social media:

His arms been retired for a while https://t.co/LmZqZjmWYz

Other QBs from same draft (Eli, Rivers) already out of football. Hats off to Ben for a long and successful career. https://t.co/uhVtak1DYk

Big Ben waited one year too long to retire, like many HOF QB's. https://t.co/wYLN503zaq