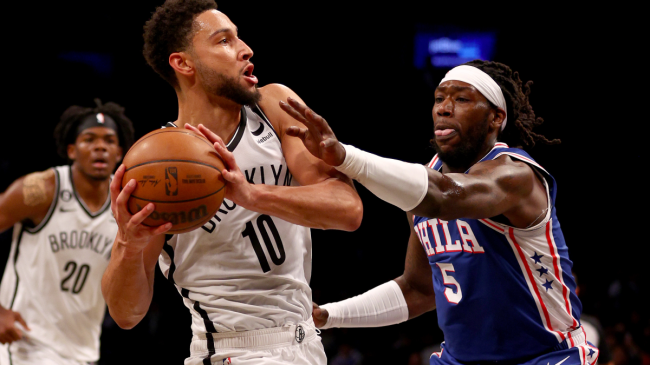 Ben Simmons is finally back on the basketball court, and it doesn’t look like he’s missed a beat following that year-long absence. The versatile guard made his 2022 preseason debut against none other than the Sixers on Monday night, the team he was traded from just last year.

Simmons failed to suit up in the 2021 campaign, citing both back injuries and mental health as reasons for staying off the floor. He missed the first half of the season while in Philadelphia, a trend that continued once he was dealt to Brooklyn in February.

It appeared that he might be able to make his Nets debut in the postseason last year, with folks circling Game 4 of the team’s playoff series against the Celtics for the long-awaited return.

Unfortunately, that didn’t come to fruition, leading to a negative reaction amongst most of the NBA media.

After an offseason of work, though, Simmons finally got his body and mind ready to play. Monday’s matchup with the Sixers represented his first action in Brooklyn, and he didn’t disappoint.

More than a year removed from his last NBA appearance, Ben Simmons made his Nets debut, though head coach Steve Nash did keep him on a pitch count.

He looked explosive in limited action and showed an eye for getting the ball to the right spot on the court.

Ben Simmons warming up for his first game on 440 days. pic.twitter.com/n5LUmXz4NL

Simmons played the entire first half, making a number of notable plays which included his first basket as a Net.

BEN SIMMONS IS BACK 🚨 pic.twitter.com/Q7255CDUCc

He also found his teammates on multiple occasions with impressive passes from his point guard position. Take a look at the no-look dish to Nic Claxton for a dunk just before halftime.

What a pass from Ben Simmons. 🔥

Of course, with the good came some bad. Simmons was booed by fans while lining up for free throw attempts, and one massive brick on a fadeaway jumper is now making its way around social media.

Ben Simmons getting some boos from the crowd while at the free throw line 👀 pic.twitter.com/BKNwsNLniW

Still, overall, it was a successful return to the court for Brooklyn star. He finished with a final line of 6 points, 5 assists, and 4 rebounds over 19 minutes of action. The Nets will certainly take that following a 440-day hiatus.