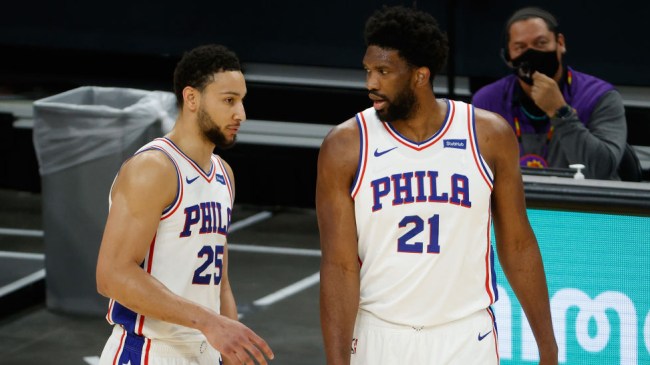 The season-long saga between the Philadelphia 76ers and former first-round pick Ben Simmons has finally come to an end. Philly sent him packing for Brooklyn on Thursday in a massive trade for guard James Harden.

In all, the Sixers gave away Simmons, Seth Curry, Andre Drummond, and two future first-round selections. This agreement comes just hours prior to the trade deadline, which was set to end at 3 PM ET.

Both teams appear to have benefitted from the deal. The Sixers bring in a superstar shooter as they look to build for an NBA Playoff run. With the trade, Philadelphia has seen championship odds increase across the board. They also get rid of dead weight as Simmons made it abundantly clear that he did not want to play in the City of Brotherly Love.

The NBA Championship Odds have shifted…

The Nets, meanwhile, get not only the potential that Simmons brings to the court, but also a chance to build upon the future with those NBA Draft picks. It’s been mentioned that Harden wanted out of Brooklyn, so the trade made sense for both parties.

While it seems like a win-win in terms of the outcome for each team, some of 76ers’ stars weren’t happy with how the Simmons’ story played out in Philly.

One of those stars was MVP favorite Joel Embiid, who has been vocal about his former teammate’s antics in the past. He took to social media to troll Simmons one last time.

To give some clarification, the original photo refers back to a post from a since-closed Instagram account named “bigfend.” The post comes with the caption “I Stopped By One Of My Biggest Haters Funeral Today Just To Make Sure [he] Was Dead.”

Essentially, Embiid is sending his final farewell to Simmons, whom he classifies as both a hater and an overall bad teammate. Good riddance.

The hostility between Simmons and his former employer should make for prime viewing enjoyment when the Nets travel to Philadelphia to play the Sixers next month.