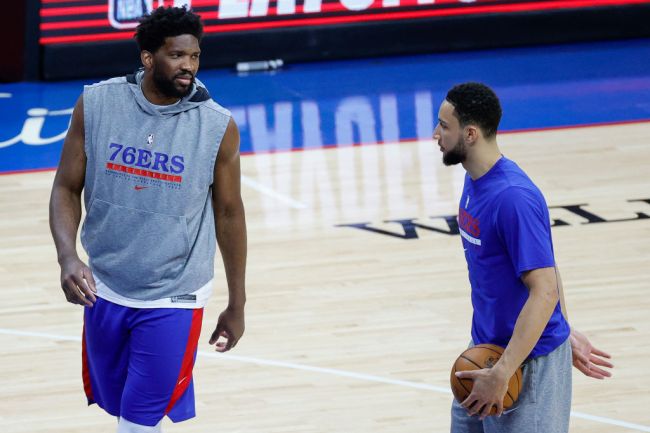 Joel Embiid isn’t going to put up with Ben Simmons’ B.S. and stay quiet about it.

On Tuesday, Simmons got kicked out of practice by coach Doc Rivers and suspended for one game by Sixers for refusing to engage in practice.

Simmons’ reluctance to physically and mentally engage with the Sixers since his return has been a consistent theme, sources tell ESPN. https://t.co/bG1Cs2EuZ4

The 76ers say Ben Simmons has been suspended for one game for “detrimental conduct” to the team.

Simmons will not play the 76ers’ season opener at New Orleans Wednesday night.

Simmons’ suspension comes a day after he was seen with a phone in his pocket in practice and refusing to participate in the team huddle.

After today’s practice session the media caught up with Simmons’ teammate Joel Embiid who appeared to take shots at the disgruntled Sixers star.

Embiid says he has not talked with Simmons since he returned.

“At the end of the day, our job is not to babysit somebody”

Embiid: “I’d be willing to babysit if someone wants to listen, but that’s not my my job”

Joel Embiid: “At this point I don’t care about that man.”