Ben Simmons Awkwardly Shows Up To Sixers Practice Wearing Sweatpants, Wouldn’t Take His Phone Out Of His Pocket, And Slinked Out During Team Huddle 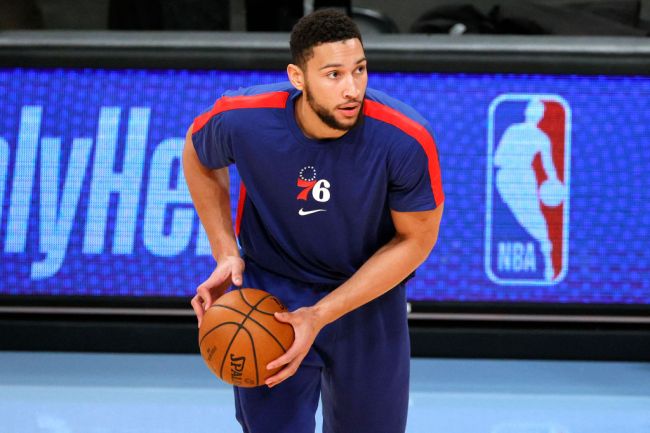 After a summer filled with drama Ben Simmons showed up to Sixers practice but it was apparent that he didn’t really want to be there.

Months after demanding a trade, Simmons is back with the team and was seen participating in practice on Monday.

Ben Simmons at practice for the first time since his trade request 😂😂 pic.twitter.com/3xoEtM3nuL

Fans noticed that Simmons awkwardly practiced while wearing sweatpants and had his phone in his pocket the whole time.

Ben Simmons practicing in sweatpants with his phone in his pocket. pic.twitter.com/MEdQLxudcK

Could not see it from our vantage point at practice earlier but I suppose we can add “it looks like Simmons practiced with his cell phone in his pocket” to the list of topics for tomorrow pic.twitter.com/A2s36Uyjl3

When it was time for the team huddle at the end of practice Simmons was seen dribbling a basketball behind his teammates and was one of the first ones to exit the floor.

Here’s @BenSimmons25 (in the back) not participating in the post-practice huddle with the @sixers before quickly exiting the floor @6abc @espn @NBATV #sixers #bensimmons pic.twitter.com/2uq7YAu5E1

Although Doc Rivers tells me the “chemistry” with @BenSimmons25 and his teammates is getting better everyday, I can tell you he did NOT put his hand in the team huddle to end practice and stayed in the back before immediately exiting the court while others stay out shooting pic.twitter.com/i2sBAoEHO2

Before the start of the season, Simmons threatened to sit out unless he was traded but then changed his tune when the Sixers started to withhold his paycheck. It’s currently unclear if the Sixers will eventually trade Simmons but it seems like he’s going to make things as awkward as possible.