WATCH: Bengals WR Auden Tate Made The Craziest Catch Of The Preseason 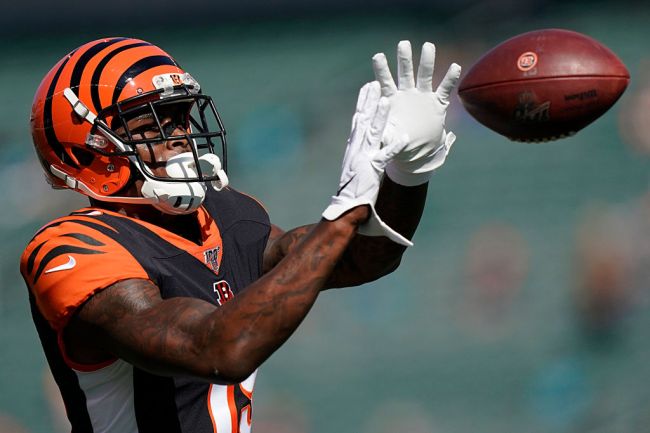 Auden Tate might be the Bengals’ fourth wide receiver, but that isn’t stopping him from making absurd plays. The 24-year-old saw significant playing time on Friday and made the best catch of the year so far.

Tate, entering his fourth year in the NFL, is slated to play behind Tyler Boyd, Tee Higgins and No. 5 overall pick Ja’Marr Chase in 2021. It will likely be his last season in Cincinnati and he is already making quite the case to earn a larger role with another organization.

During the third quarter of the Bengals’ preseason clash with the Washington Football Team, Tate came down with a ridiculous circus catch. He broke down the sideline on what looked like a go-route and hauled in a ball from quarterback Brandon Allen.

Covered by WFT corner Troy Apke, Tate leaped up for a jump ball before realizing that the pass was slightly under-thrown. As Apke tried to bring him to the ground, he bobbled the ball off of his chest and both arms before pulling it in and bringing it to the ground.

It was a terrific catch for Tate, who must make the most of his opportunities. He finished the night with two catches on two targets for 23 yards.

Regardless of his limited numbers, Tate made the play of the preseason and there is no debate. That will be fun to watch back on film.