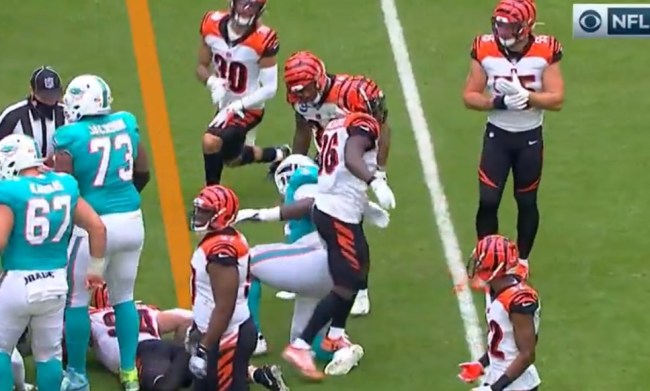 Bengals safety Shawn Williams is probably going to get a call from the league for his conduct on the field on Sunday.

During the Bengals-Dolphins game, Williams could be seen appearing to intentionally step on Dolphins offensive lineman Solomon Kindley’s ankle.

A look at Shawn Williams stepping on Solomon Kindley's foot here. Worth noting Kindley is dealing with a foot injury. Williams is also the same guy who got ejected in 4th quarter after a violent shove to DeVante Parker's helmet that led to the WRs starting to throw punch. https://t.co/17KH1wGpLL

Williams was also ejected during the Bengals-Dolphins brawl later in the fourth quarter.

Dolphins not happy about Jakeem Grant getting hit twice on cheap shots. Coming to his defense. pic.twitter.com/rThO3i3CBF

Shawn Williams who appeared to swing or shove DeVante Parker in the helmet to get this started also ejected with Parker and Hollins.

Dolphins fans are calling for Williams to get suspended by the league for stepping on Kindley’s ankle.

Come on now find suspended rest of the year https://t.co/Vde49yf3EW

The NFL really needs to do something about this waste of a team. They continue to intentionally hurt players year after year. https://t.co/lXItwnr8ik

Wtf is this??? Suspend his ass @NFL https://t.co/evxpXlPYrV

@NFL @NFLResearch @NFLOfficiating This guy should get suspended for this move. Got kicked out later. What a dirty move and dirty team. @andrewperloff https://t.co/K2q0wut0Jr