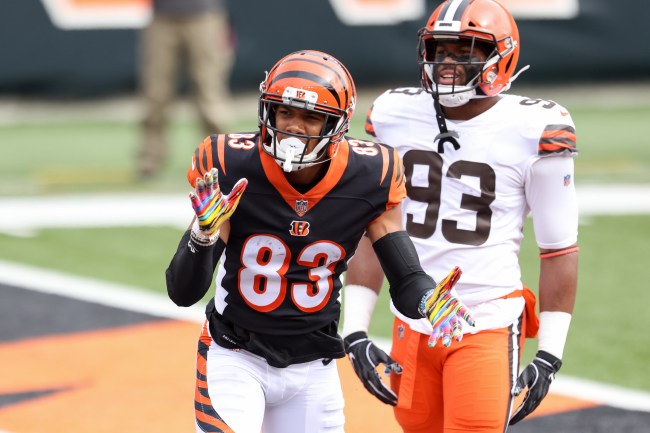 Tyler Boyd has a bone to pick with his teammate Carlos Dunlap.

During the team’s heartbreaking loss against the Browns, Dunlap was seen getting into it with one of his coaches on the sideline.

This is Carlos Dunlap arguing with a coach at the end of the game. Appears to be defensive line coach Nick Eason. #Bengals @fox19 pic.twitter.com/5E8cXf1jjK

Immediately after the game, a disgruntled Dunlap put his up for sale on social media.

Carlos Dunlap is trying everything to get out of Cincinnati: pic.twitter.com/k2M85dEytY

After his news conference, Tyler Boyd had this response to Carlos Dunlap's property listing on IG (h/t @Scalfff) pic.twitter.com/623EpJpRrE

While speaking to the media Boyd was also critical of Dunlap’s behavior on the sideline.

Tyler Boyd on Dunlap: “He’s a vet, so he knows what he should or should not do… We hold each other accountable no matter what coach it is.”

Tyler Boyd on Carlos Dunlap and him posting his place for sale after the game: "I ain't worry about all that right now."

Tyler Boyd was asked about Carlos Dunlap tweeting about selling his house and end of game incident.

“For him to do that on the sideline, I don’t agree with it.”

This locker room is fed up with his nonsense. #Bengals

IT’s pretty clear the team is going to be forced to trade Dunlap because the Bengals locker room is fed up with his b.s.