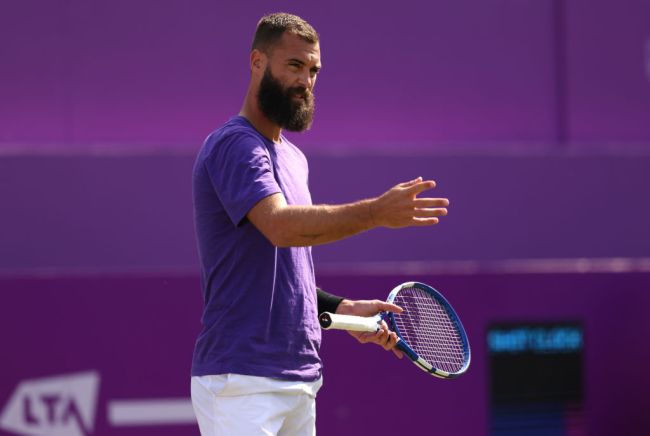 Benoit Paire is a showman and wants to play in front of fans. The 32-year-old Frenchman is a professional tennis player who has no interest in playing the sport during the COVID-19 pandemic.

He hates the bubble, hates protocols and just wants to collect a paycheck, enjoy some time in the host city and move on. As a result, he is tanking his matches in comedic fashion.

At one point, Paire was the No. 18 tennis player in the world. He is now 3-23 in his last 26 matches and continues to intentionally lose.

Earlier this year he said some pretty telling quotes about where he stands with the sport.

“I lost in the first round, so much the better: I will be able to get out of the bubble fairly quickly and enjoy a few days before Miami, “I’m hoping to be able to go to the beach and the pool.”

“I’m not happy on the court. I don’t touch my racket [in between tournaments] at all. It makes no sense to pay anyone on tour at the moment.

“Tennis is not my priority for the moment. Getting out of the bubble is the only goal I have at every tournament.”

“I’m on my own. I have nothing – no coach, no physio… I’m not training. I’m not ready for the big matches.”

“I arrive, I take some money and I go to the next tournament: I do my job”

He’s not even trying to hide the fact that he does not want to be there.

Benoit Paire fighting all the way to the end! from tennis

He gets in and gets beat as quickly as possible.

He literally celebrates his losses.

As a result of his intentional poor play, he was removed from the French Olympic team.

“His behavior, which has been deeply inappropriate since the start of the year, seriously undermines the values ​​of sport.”

Paire didn’t care. He went to the beach.

Paire continued his losing streak on Tuesday at the most prestigious tournament in tennis— the Wimbledon Championships.

His first round pairing came against Diego Schwartzman. The two began their match on Monday and Paire actually tried in the first two sets. However, he found himself trailing two sets to none before the match was suspended due to darkness.

Forced to continue on Tuesday, Paire lost any interest in giving effort.

Shortly after the play was paused, he posted this instagram with the caption “this is really what I’m doing right now”:

As you could guess, Tuesday’s resumption did not go well. Paire had no interest in continuing on and lost the third set 6-0. It took just 15 minutes.

After falling behind 5-0, Paire ripped two forehands directly into the net and went down 0-30 in the final game. At that point, chair umpire Mohamed Lahyani gave Paire a warning to try harder. A hilarious scene would unfold.

Paire demanded a trainer and fans yelled at him “you’re wasting everybody’s time!”

When asked why he needed to see a trainer, he said “I have pain” and walked to the sideline. He and Lahyani went back-and-forth before play resumed, with Paire calling the umpire “overzealous” because at that point there was nothing to be done. The match was over.

Eventually, Paire walked back onto the court and gave a lackluster attempt to return a forehand while giving a big groan as if it was so laborious.

Schwartzman won the final point and the match, sending Paire packing. At this point, he has pissed everyone off and doesn’t even have a sponsor. But he doesn’t care and his streak of losses are pure entertainment gold.