Picks Against The Spread For Each XFL Week 2 Matchup 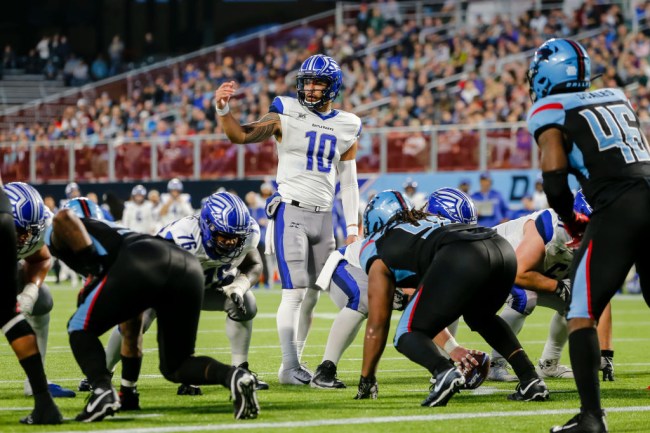 MLB teams are reporting to spring training and we’re just a couple of weeks away from March Madness, but screw that! We still have football!

It feels so strange to talk about football at this point in the year, but the XFL made an impact last week; they saw higher TV ratings than the AAF’s debut and already sold more game tickets in their first week than the AAF did all season. Don’t ever doubt Vince Kennedy McMahon.

So with that, here are the bets to make for Week 2 of the XFL.

Both these teams came away with easy victories in their league debuts; the Guardians grabbed a 23-3 win over the Tampa Bay Vipers and the Defenders had a win over the Seattle Dragons 31-19.

Former Ohio State quarterback Cardale Jones is one of the more notable players in the league and had an efficient performance in Week 1 with 235 passing yards and two touchdowns.

Along with a strong offense, the Defenders’ defense, well… defended. Their defense came away with two interceptions, including one returned for a touchdown, and their special teams also contributed with a blocked punt.

Former Las Vegas Raider quarterback Matt McGloin was solid for the Guardians with a passing and rushing touchdown.

New York’s defense was their highlight as they had four takeaways including a forced fumble returned for a touchdown.

The storyline of the game will be can Cardale Jones have a repeat performance versus this Guardians’ defense. Jones has some great receiving weapons, including former Steelers receiver Eli Rogers who led the team with 73 receiving yards.

Both these teams will look to rebound after losses last week; Seattle was defeated by D.C. 31-19 while Tampa was smashed 23-3 by the New York Guardians.

Despite not coming away with a win Seattle looked good; they scored three offensive touchdowns and only gave up two. What hurt them the most last week was the turnovers with three.

On the flipside, in Tampa Bays’ loss, they looked like they struggled. Former Georgia quarterback Aaron Murray, who was one of the players advertised going into the season, did not look good in his debut; he threw for two interceptions and his 45.1 QB rating was the lowest amongst all the starters last week.

Runningback and listed backup quarterback Quinton Flowers saw some reps behind center and was able to move the ball, it’ll be interesting to see if Murray has a short leash this week. One positive to take for the Vipers on offense was Daniel Williams who led the league in receiving yards last week.

Based on last week’s games, Seattle looks to be the better team and it seems like it’s gonna be a great home crowd.

This matchup features two teams that are coming off losses; Dallas lost a close one 15-9 to the St. Loius Battlehawks and L.A. was destroyed 37-17 by the Houston Roughnecks.

Notable former Steelers backup and Renegades starting quarterback Landry Jones was unable to play last week due to injury and Dallas’ offense was unable to score a touchdown in their loss to St. Louis. If Jones is able to play, that would be a huge upgrade to the offense.

The biggest problem last week for the Wildcats was in their defense as they struggled and gave up the most points in the league, and in result fired their defensive coordinator.

Dallas looked a lot better than Los Angeles and if Jones returns, which he’s on track to, they’re the clear favorite.

We have the second matchup that will be between two undefeated teams as St. Louis snuck by Dallas 15-9 and Houston routed Los Angeles 37-17.

St. Louis was very impactful on the ground as former Washington Redskins’ running back Matt Jones rushed for a league-leading 85 yards and former Ole Miss quarterback Jordan Ta’amu ran for 77 of his own. Their defense was solid, giving up zero touchdowns and had one interception.

Houston was one of the best looking teams last week; P.J. Walker leads the league in passing yards with 273 and four touchdowns in Week 1 while their defense was tough with two interceptions and a forced fumble.

This is going to be the most exciting matchup this week. St. Louis will try to ground and pound their way to a win, while Houston will go to the air. Both defenses were impressive last week, this will be a close game.