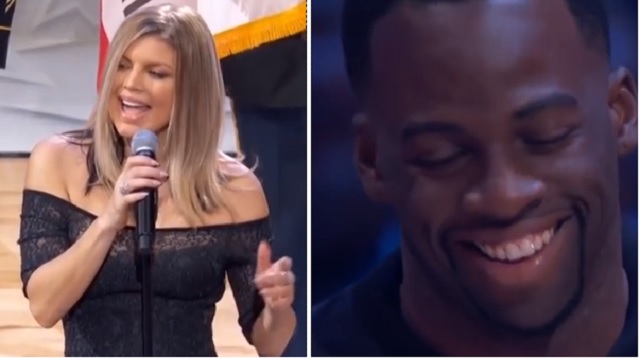 There was some drama last week when Fergie’s ex-husband, actor Josh Duhamel, called out the Golden State Warriors for laughing at Fergie while she sang the National Anthem during the NBA’s All-Star Game last season. Duhamel said he was ‘pissed off at Draymond Green’ and thought that he needed to issue an apology to Fergie.

This news reached the Golden State Warriors locker room who instead of responding with an apology, responded by mocking Josh Duhamel with a remix of Fergie’s rendition of the National Anthem. You can see that original remix here, a remix that has set off the latest Internet dance craze with people like Snoop Dogg dancing to the #FergieRemixChallenge.

Josh Duhamel was foolish for thinking he could just make some comments about his ex-wife deserving an apology and everyone would go about their business. Duhamel inadvertently launched the latest dance craze like The Harlem Shake and this one seems to have some legs.

DJs, Twitter users, Snoop Dogg, and others are already getting in on this craze. For The Win has pulled together the best of the #FergieRemixChallenge videos so far and I’ve got some of those below for you.

Snoop Dogg getting in on it with a blunt.

They’re all just so damn good.

Thanks to @Fergie and the Golden State @warriors, we are starting our week off with a Monday morning #turnup!! #FergieRemixChallenge pic.twitter.com/1JM62bbHPn

Where’s Fergie stand on all of this? She’s taking it in stride and even made a joke on Twitter about how her performance made it all memorable.

There are already thousands of these Fergie Challenge Remixes on Instagram and Twitter so it appears as if this dance craze is going to last for another week (at least) as it’s just gathering steam.