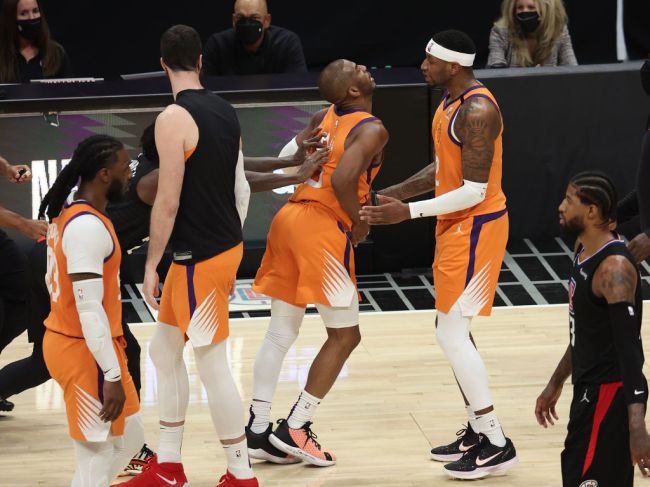 I never thought I’d type this but Chris Paul hitting the floor was actually warranted. After defecating all over his former team with a 41-point performance, Paul was victimized by Patrick Beverley who could not contain his frustration and pulled an Eric Gordon in the Academic Decathlon.

That’s as far as the metaphor goes, as Frank Kaminsky played the exact opposite role of Steve Buscemi in the incident, not only failing to stop the incident, but essentially standing there like a stoned oak tree after it all went down.

Patrick Beverley was ejected after shoving Chris Paul from behind. pic.twitter.com/z0GFL1tb6J

The shove came in the direct aftermath of Paul hitting his sixth three-pointer, to extend the Suns’ lead to 118-92 midway through the fourth quarter. The two shared words before Paul turned back to head to the Suns bench. That’s when Pat Bev, who finished with 11 points in 31 minutes,  decided to act like a middle schooler who just got his Dunkaroos stolen from him.

NBA Twitter, many who believe Beverley’s petulant pattern of behavior is Bad For The Game, came out in full force to mock the 32-year-old before he heads to Cancún.

Patrick Beverley when a game is out of reach pic.twitter.com/qOdxSIiYxy

as a great mind once said about Patrick Beverley.. #LACvsPHX pic.twitter.com/k1AIHSGebq

Oh you’re telling me Patrick Beverley is behaving like a frontrunning coward??? No way??????

Who did this? 😂 Just went to Wiki and saw this update. #clippers #suns #patrickbeverley pic.twitter.com/zXN4o98ANc

Patrick Beverley just shoved his union president. That has to be against the bylaws.

Patrick Beverley in the Clippers locker room watching the rest of Game 6 on TV after being ejected for shoving Chris Paul pic.twitter.com/UNttUjBjq2