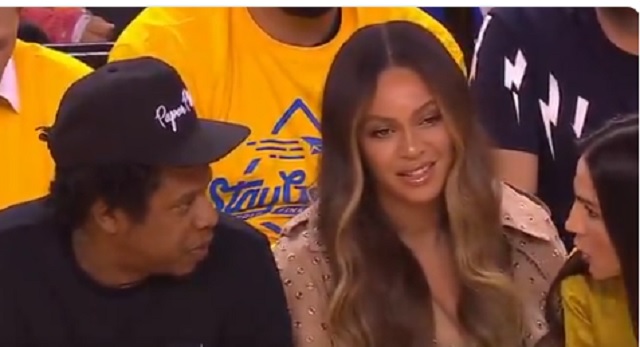 Plenty of celebrities attended game 3 of the NBA Finals between the Warriors and the Raptors including rapper Jay-z And Beyonce.

During a break in the game, both Jay and Bey were introduced to the crowd and some woman sitting next to them began talking to Jay.

Let’s just say Beyonce did not look happy at all.

Beyoncé don’t like that girl beside her at all.

I would leave the earth if Beyonce looked this ready to smack me https://t.co/Yaf4JKeMhN

Beyoncé is not feeling this side conversation though… you see her shift in her seat in the end 😂 https://t.co/EUyrrUYaGM

beyoncé’s face when shorty leaned over to talk to jay 😂😂😂 pic.twitter.com/5PqIhCmgGy

Beyonce is about to kill this woman https://t.co/wu3CV9zbL4

Beyonce legit wants to smack fire out the chick next to her for even breathing her oxygen & trying way too damn hard to talk to Hov.pic.twitter.com/MRy3L2SBtl

Y’all see how Beyoncé lowkey tried to bump her at the end? She was not having it😂 https://t.co/UWkcYEGAxL

Beyonce: “This Becky with the good hair bout to get her wig split” pic.twitter.com/1BpSWdYzNB

Becky with the good hair really be testing Beyoncé. pic.twitter.com/L80o7pt0d5

Apparently, the woman Jay was talking to was Nicole Lacob, wife of Warriors owner Joe Lacob.