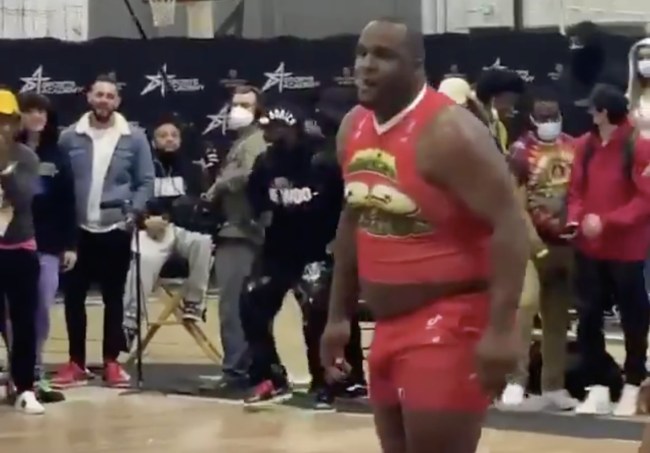 In its inaugural year, The Crew League brought some of the music industry’s top hip hop stars and their “crews” to Los Angeles for a 10-team, 4-on-4 style basketball tournament. Trippie Redd, Jack Harlow, Lil Mosey, Lil Durk and G Herbo were among the featured artists that played in the league, among many others.

Never know who you're going 👀 to when you train with us. pic.twitter.com/xQ1klByn52

Of the big names, Glen ‘Baby’ Davis laced up his sneakers and took the court alongside Rae Sremmurd rapper Swae Lee. Forming an unlikely friendship, the two teamed up to win the whole thing behind some classic Big Baby post moves. The former Celtic, Magic and Clippers big man dominated the paint and celebrated with his teammate when the clock hit zero. Davis stands 6-foot-9, 289-pounds while Lee is 5-foot-5, 121 pounds.

It was a glorious pairing that proved to be the most dominant in the Crew League. Also, can we talk about Davis’ shorts?!