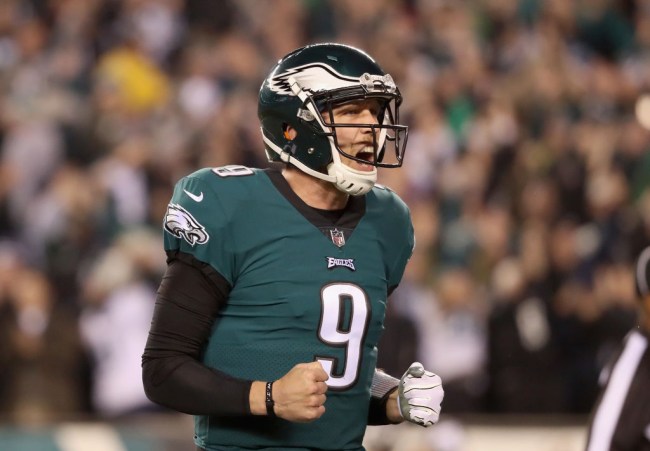 Earlier this year, the world learned Philadelphia Eagles quarterback Nick Foles has some of the largest testicles in the NFL when he convinced his coach to run the instantly-legendary (and technically illegal) “Philly Special” on his way to delivering his team a Super Bowl. However, anyone who knows anything about Nick Foles already knew his jockstrap was already being pushed to the limits prior to the game.

Four years ago, former Eagle Connor Barwin made an instantly-legendary decision of his own when he did an AMA on Reddit and was asked about who in the locker room was packing the most heat below the waist. Instead of ignoring the question, he did his teammate a major solid when he answered, “Doesn’t the internet know it’s Nick Foles?”

It was only a matter of time before Foles earned the alias “Big Dick Nick,” making Randy Johnson’s nickname “The Big Unit” seem tame in comparison. As far as I know, no one had ever asked Foles about how he feels about the moniker, but based on a recent interaction, he seems (rightfully) to be a fan.

Foles is currently on tour promoting his new faith-based book Believe It: My Journey of Success, Failure, and Overcoming the Odds. While touring, he posed for a picture with a fan who I’m guessing didn’t show up in search of the QB’s spiritual guidance.

According to Busted Coverage, reporter John Clark shared Foles’ reaction after discovering what was on the back of the jersey:

Nick Foles took this pic with an Eagles fan as he starts his book tour. Nick did not know what the jersey said on it, heard Eagles fans laugh, and asked fan what it said. Nick found out and was quietly amused.