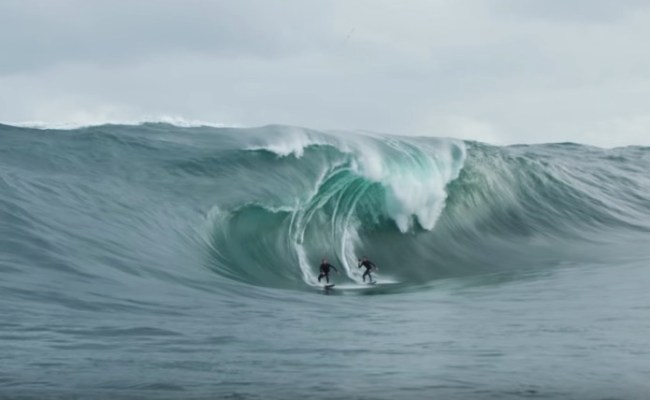 Big Wave Surfing is one of the most dangerous sports on the planet. It’s hard to grasp how truly terrifying things can turn in an instant.

It can all start with going ‘over the falls’, meaning the wave picks you up and throws you upside down into the water. This will happen if you lose your balance and get sucked up into the wave or if you’ve tried to paddle through a wave and you hit the crest just as it’s breaking.

The latter is one of the most terrifying experiences in life because you’re just one or two paddles away from freedom and then all of a sudden you’re moving backward. You’ve lost complete control. You are upside down and floating through the air and for a millisecond you don’t know up from down.

Then, you crash into the ocean and don’t know your ass from your elbow. The density water is super light with oxygen because of the crashing waves so your body isn’t immediately floating upward like it would if you were snorkeling on a tranquil coral reef.

There’s a decent chance that the oxygen in your lungs is gone because you got the wind knocked out of you when your body hit the water.

You need to get to the surface and take a breath because the world feels like it’s about to black out. But you can also hear a crashing underwater. You know that another wave is coming. You need to get up and take that breath before the next wave comes through and you’ll hope that when you breach the surface one of the rescuers on jetski will be there to save you.

Here, surfer Bradley Norris recounts what it was like when he was held down for 3 waves. His ears and nose were bleeding, he thought he was dead for sure. But he managed to survive and tell his tale:

As one of the YouTube commenters so aptly pointed out, he could’ve just saved us all the terrifying 2.5-minute story and admitted that it was his gigantic balls holding him down all along.

I think the most terrifying part of this story for me was hearing about the CO2 canisters and how he inflated them and nothing happened immediately.

You know that once they’re deployed your body will eventually float up to the surface but you *don’t know* if you’ll be alive when that body gets to the surface. You’re sort of banking on being able to hold onto life for long enough until the jetski rescuer can grab your arm and whisk you away to freedom.

It takes a special kind of crazy to get into Big Wave Surfing.