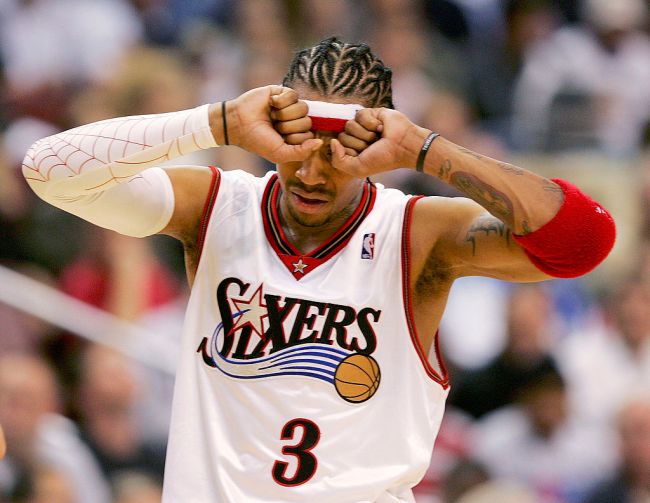 Former NBA superstar Allen Iverson once got uncomfortably high with the Notorious B.I.G. and Lil Cease in the 1990s. He recently joined The Players’ Tribune and told the story to Al Harrington, a noted cannabis enthusiast, investor and activist.

And now for storytime with @alleniverson …

As Iverson tells it, he was hanging out in the studio with the two rappers and wore a shirt that was inspired by Janet Jackson’s Rolling Stone cover from 1993. However, on the shirt, Jackson was replaced with a cartoon illustration of an alien.

After burning it down with Biggie and Cease, Iverson went to the bathroom and totally tripped out.

“I just remember going to the bathroom… I’m looking in the mirror at the shirt, and I notice that the shirt did not have her face… it had an alien face on her body,” he said.

Iverson was so stoned that he forgot he was wearing a parody version of the Jackson cover. He couldn’t figure out what had happened to her face.

“I’m looking in the mirror and I’m trippin.’ I’m wiping the shirt off [to try and reveal the human Jackson’s face] and everything. I’m thinking like that’s supposed to be her, but it’s this alien cartoon character,” he recalled.

Failing to figure it out.

The Philadelphia 76ers legend eventually tried to get it together and headed back to the studio, but he repeatedly got lost and kept ending up back in the bathroom.

“A lady was walking by, and as I was walking by her, I was just stomping ‘cause I couldn’t feel my feet. And she was like, ‘Uh, A.I., you alright?’” he laughed.

Iverson also added that when he went back to his hotel room, everything was spinning. He was used to smoking cannabis buds, but — unbeknownst to him — he was chiefing hash with Biggie.

Iverson recently released his own strain of marijuana with Harrington’s cannabis company, Viola. Thus, him joining Harrington to regale hilarious stories about THC was intentionally timed. You can watch the full interview here.

Either way, the Notorious B.I.G. had some incredible weed and got Allen Iverson so high that he couldn’t feel his feet. Legendary.

Will Iverson’s strain do the same?