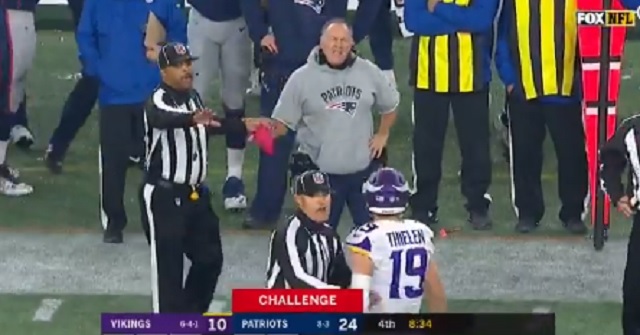 In the fourth quarter of today’s Vikings’-Patriots game, Thielen was seen jawing at Belichick during a ​fourth-quarter challenge. Belichick didn’t seem to appreciate Thielen’s trash talk and straight up told him to shut the fuck up.

From the lip-reading department:

Bill Belichick (looking in Thielen's direction): "Shut the f— up."

Adam Thielen and Bill Belichick jawing at eachother. Seems like Bill tells Thielen to “Shut the f*** up.” pic.twitter.com/FxWnYWmpKa

Pats fans were fired up over the confrontation.

Belichick and Thielen yelling at each other has to be because they know they are supposed to be together.

If I just read his lips correctly, Bill Belichick just told Adam Thielen to "shut the fuck up" and "sit the fuck down". What a legend.

Gimme the Belichick-Thielen fight give it to me.

Opening odds for Belichick vs Thielen:

Me seeing Belichick tell Thielen to shut the fuck up… pic.twitter.com/xkqmvqro1t