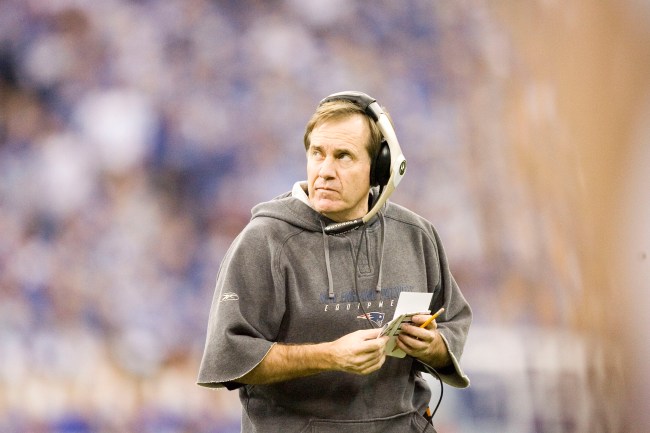 You: So you’re meaning to tell me that New York sports media personality Mike Francesca has been sitting on this nugget of information for over a decade, and only until he’s announced his departure from WFAN after getting crushed in the ratings by ESPN New York’s Michael Kay Show, he decides to cough it up?

Me: Listen dude, I’m just as confused as you are. But let’s hear him out.

On Tuesday afternoon, a caller to Francesa’s show asked if he thought Belichick might leave the Patriots for another team. Francesa was adamant he would retire a Patriot, and went on to claim that Belichick almost left the Patriots in 2007 in the wake of Spygate.

The NFL subsequently fined Bill Belichick $500,000 (the maximum allowed by the league and the largest fine ever imposed on a coach), fined the Patriots organization $250,000, and plucked their first-round selection in the 2008 NFL Draft.

Take it away, Mikey.

Mike Francesa reports that Bill Belichick was ready to bail on the Patriots around the time of Spygate. Mike is not at liberty to reveal the team he was headed to. pic.twitter.com/026jqBQWMR

“Let me just tell you this: There were rumors, and I’m not going to tell you what team it was because it doesn’t matter now,” Francesa said. “There were rumors that he was thinking of leaving years ago, and that’s when he got in trouble with the league, and Kraft backed him to the moon. And I think that ended any chance of him leaving … they were going to suspend him, Kraft kept him from getting suspended and he was supposed to apologize and he didn’t, and that’s when he got into a rift with the commissioner because Belichick was supposed to apologize and he didn’t.

“But Kraft has backed him to the moon, and I think that ended any chance of him taking a huge-dollar offer from another team, which I think could’ve happened at that point. I think now he and Brady will end their careers as Patriots, I’m not saying at the same time, I’m not saying he’ll leave when Tom leaves, but I think Tom will stay until he’s ready to leave as a Patriot, and I think Belichick will do the same. I doubt he will at this juncture go to another team. I doubt it. I think probably he will stay, now I don’t know how many years he’ll coach, he can coach as long as he wants, he’ll probably coach as long as it’s fun.”

Can you imagine how differently the landscape of the NFL would have looked if Belichick had jetted for, I don’t know, the Bengals? Just try to imagine talking heads discussing whether or not Andy Dalton belongs in the Hall of Fame. I simply don’t have the imagination to conceive that.

I guess Francesa will say anything to get people to stop talking about #FARTGATE.

We had fireworks today if you missed it. Mike Francesa appeared to have farted during his morning show on the app. I posted the clip at 10am. The Daily News then wrote a story about the fart this afternoon.