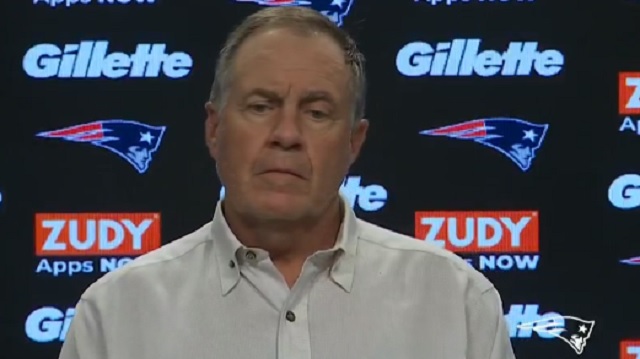 The ongoing Antonio Brown drama took a serious turn last night when he was accused of raping his former trainer Britney Taylor in a lawsuit filed in Florida.

Apparently, the New England Patriots were blindsided by the allegations and are now playing catch up.

My understanding is that neither the league, nor the #Patriots, knew about the potential lawsuit for WR Antonio Brown before he signed in New England. Asked about that today, Bill Belichick said: “I’m not going to be expanding on the statements that have already been given.”

The Patriots released this statement last night saying they were taking the allegations very seriously.

Today, Patriots head coach held his weekly press conference and was bombarded with questions about Brown’s sexual assault allegations. While Belichick did say Brown would be practicing with the team today he refused to answer questions regarding the allegations.

After nearly 4 minutes Belichick was fed up with questions and told reporters he was “done” addressing the matter.

Bill Belichick did not take any questions on the @MiamiDolphins because none were asked. All about the Brown situation. Basically 4 minutes of Bill saying "we are not talking about that" #Patriots #WBZ pic.twitter.com/6bjxxuhTy5

At the end of the press conference, Belichick got into a heated back and forth with reporters and stated that he was “done” talking about Brown and left when no one asked a question about the team’s upcoming game against Miami.