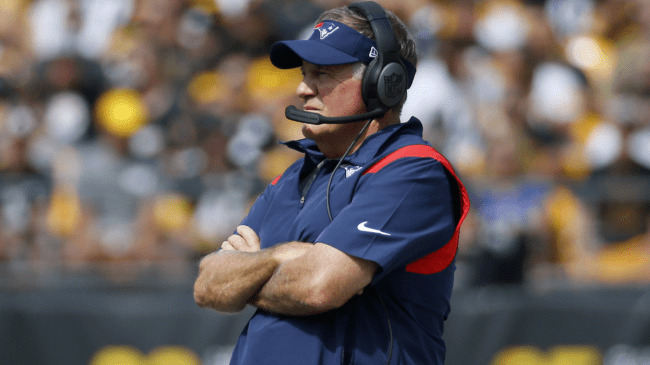 The New England Patriots had a rough weekend. Not only did they lose to the Ravens, allowing Baltimore to end the game on a 23-6 run, but they lost quarterback Mac Jones in the process (though not before he embarrassed himself with possibly the worst “griddy” of the NFL season).

Jones suffered a leg injury in that defeat, and while it’s not evident how long he’ll be out of the lineup, initial reports seem to suggest it could be a serious setback. It’s said to be a “severe high ankle sprain,” which could keep the passer sidelined for a few weeks.

Surgery doesn’t appear necessary, but Jones was in visible pain when being carried to the New England locker room.

With Jones likely out, New England will rely on back up signal callers Brian Hoyer and Bailey Zappe. Hoyer is a seasoned vet, having played in the NFL for 13 seasons. Zappe was the team’s fourth round pick in the most recent NFL Draft after wrapping up his college career at Western Kentucky.

Unfortunately, Bill Belichick didn’t seem overly enthusiastic about having to play either of his reserve QBs in the Patriots’ upcoming matchup with the Packers.

Belichick said he didn’t want to “speculate wildly” about the status of starter Mac Jones following his injury. Still, it seems that a different passer will lead the Patriots this coming Sunday.

“Yeah, Brian’s got a lot of experience in the offense.”

Short and to the point, I guess, but a little bit of depth might’ve instilled more confidence to fans and media ahead of a matchup against Aaron Rodgers. Belichick’s response about Bailey Zappe’s development was even more dull.

Earth-shattering analysis there from the New England head coach. We’ll see how the reserves do in Sunday’s outing versus Green Bay.