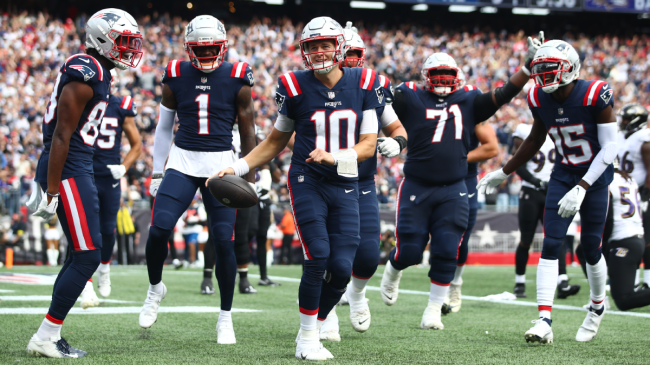 We may have a new contender for worst touchdown celebration in the NFL season. Last week, we saw Dolphins tight end Mike Gesicki drop an awful “Griddy” attempt after catching a score against the Ravens.

Now, Mac Jones is getting roasted for doing the same.

In the Patriots’ Week 3 matchup versus Baltimore, Jones was seen scampering for a short rushing touchdown in the first half. Afterwards, the quarterback dropped his rendition of the dance.

After seeing Jones celebrate his touchdown with the popular dance in the endzone, many on social media quickly responded. Most are saying that it very well could’ve been the worst interpretation of the “Griddy” so far this season.

One fan wrote, “May be the least seasoned Griddy of all time,” in response to seeing Mac Jones’s celebration, and I’d have to agree. Jones appeared to lose himself a bit, looking more like AB than Justin Jefferson.

Another NFL supporter simply posted, “Cringe,” which is really all that needed to be said.

This fan was flat out confused by the dance, with Mac Jones somehow making the “Griddy” look unrecognizable. “WTF was that celebration?”

Wtf was that celebration bro

This isn’t the first time we’ve seen Mac “McGriddy” Jones give his rendition of the popular dance. It definitely looks like it still needs work.