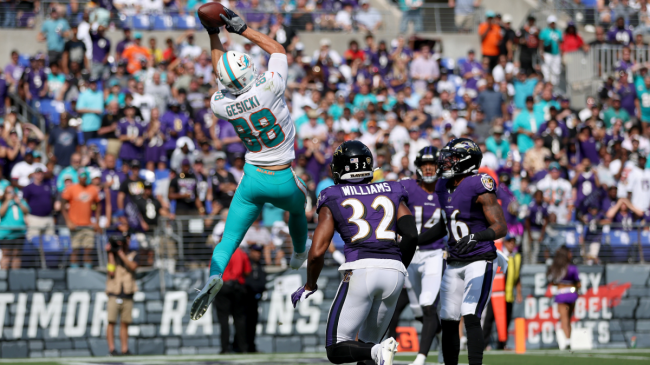 Mike Gesicki may have just pulled off the worst “griddy” attempt ever seen by an NFL player. The popular dance has taken the league by storm, starting with former LSU receivers Ja’Marr Chase and Justin Jefferson.

In Sunday’s big win over the Ravens, Gesicki tried to imitate those talented pass catchers after hauling in a big touchdown.

With Miami down 28-7 in the first half of action, the tight end leaped to nab a score from quarterback Tua Tagovailoa. The touchdown catch got the Dolphins within 14, and it began a 35-10 scoring run in what wound up being a dramatic comeback victory.

Obviously excited to catch his first TD of the season, Gesicki immediately broke into celebration. Unfortunately, it’s a scene that most NFL fans are hoping they never have to see again.

Fans couldn’t help but roast Gesicki after seeing his unwatchable “griddy” attempt. The internet was not kind to the Miami pass catcher.

Here are a few more responses to seeing the celebration.

This viewer posted, “The worst griddy I’ve ever seen,” after seeing Gesicki dance in the endzone.

The worst griddy I’ve ever seen😭😭

Others are saying that the tight end should never pull that celebration out again. Hopefully, he’s got a few more in the bag and wasn’t planning on using the griddy after every score.

never do that again

This fan simply responded, “He should be ashamed of himself.”

he should be ashamed of himself

But it was Gesicki who wound up getting the last laugh. Miami completed a 21-point comeback to land its second win of the season. Gesicki and the Dolphins will look to keep the momentum going next week against the Bills.