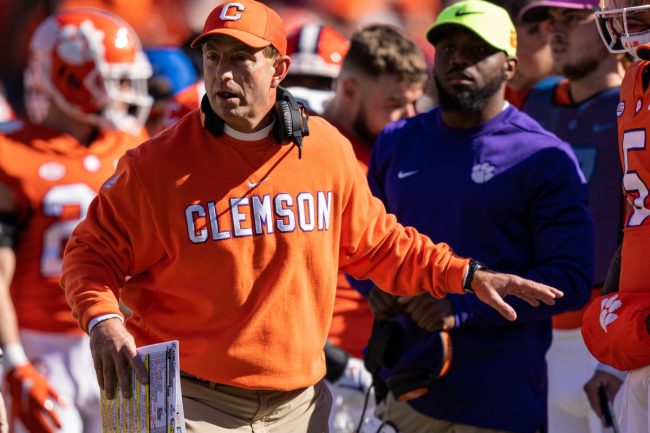 Dabo Swinney was seen doing the griddy at a recent Breast Cancer Awareness fundraiser in Clemson. The head coach helped raise over $300,000 for an awesome cause over the weekend, and it obviously had Swinney feeling good.

While everyone can rally around the fight, it’s the dance of choice that had many talking on social media. And it’s one that Swinney has a direct, negative tie to in the not-so-distant past.

A few LSU Tigers made the dance popular around the sports world. Star receivers Justin Jefferson and Ja’Marr Chase have helped it to become a mainstay around the NFL and college football.

In the 2019 season, Chase and Jefferson teamed up with Joe Burrow to form one of the deadliest offenses in college football history. The two pass catchers both racked up 1,500-yard seasons helping the Tigers go 15-0 to win a national title. The Tigers’ championship victory came against Swinney and Clemson in the final game of the year.

That matchup saw LSU leave with an impressive 42-25 win, sending Dabo home with a sour taste in his mouth. Now, one former Tiger is making him revisit that defeat after seeing the video clip.

Patrick Queen trolls Dabo Swinney after seeing him do the griddy

Former LSU linebacker Patrick Queen saw the viral clip of Dabo doing the griddy, and he couldn’t help but comment.

Glad to see he doesn’t have PTSD from this dance cause our offense went CRAZY😂 https://t.co/hmob3d8mZJ

“Glad to see he doesn’t have PTSD from this dance cause our offense went CRAZY!”

LSU put up 631 yards against the Clemson defense, outscoring their foe 35-8 over the last 40 minutes of the game. Swinney got to see that griddy a few times as the Tigers celebrated in the endzone.

At the end of the day, everyone is a winner. LSU fans could relive a great moment, Dabo got a little exposure, and a bunch of money was raised for breast cancer awareness. But you’ve got to admit this response from Patrick Queen is pretty funny.