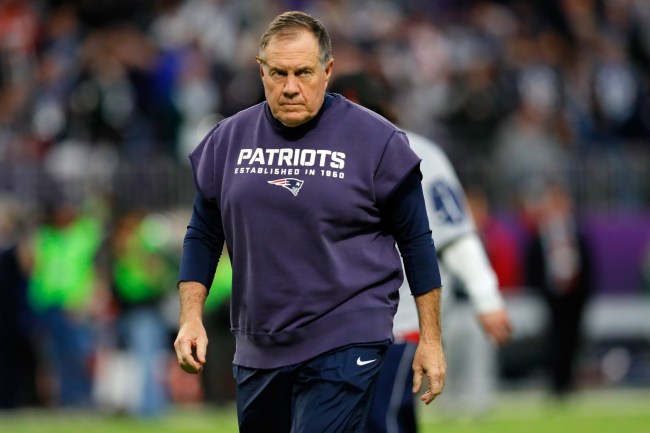 Bill Belichick and the New England Patriots have a quarterback problem this season.

On Sunday afternoon, Cam Newton was benched after throwing three interceptions in the team’s game against the Niners.

Cam Newton throws his 3rd INT of the game 😬

Jarret Stidham entered the game for Newton and he wasn’t much better.

Picks continue to shower down by Belichick's QBs. pic.twitter.com/JttbNr6Qzv

Considering that Tom Brady crushed it again on Sunday in his game against the Raiders, fans were quick to mock Belichick for running Brady out of New England.

The Brady-Belichick argument is about to get lit.

Rightfully. And we know the answer.

Consider Bill Belichick is a career losing coach without Tom Brady both including his time with the #Browns or just with the #Patriots – if we must chose, Brady made Belichick, not vice versa. https://t.co/IUKVMe3rUb

We are witnessing just how important Tom Brady was to Bill Belichick and his success as a head coach in the #NFL. #Patriots

…so Tom Brady is the 🐐 and was carrying Belichick after all? pic.twitter.com/i4BKOkvc6e

“The Patriots will be fine without Tom Brady”
“Brady was a system QB”
“11-5 with Matt Cassell”
“ANY QB WILL LOOK GOOD UNDER BELICHICK!” pic.twitter.com/pZ99EfOSKZ