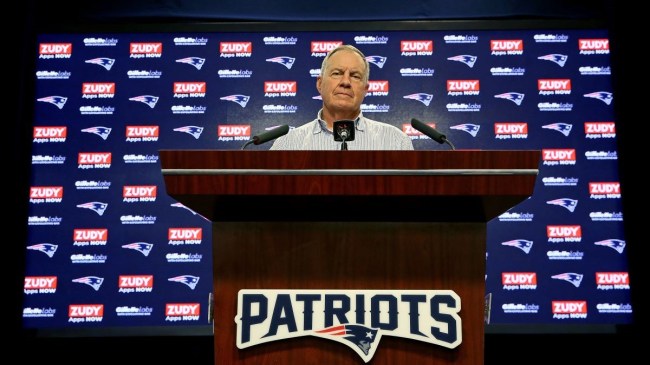 When Bill Belichick speaks, the NFL tends to listen.

And with good reason as well.

Belichick is a surefire Pro Football Hall of Famer the moment he becomes eligible. The 70-year-old is a six-time Super Bowl champion, the most all-time and two more than Chuck Noll in second. Belichick also has two rings as a defensive coordinator with the New York Giants. He’s a three-time AP NFL Coach of the Year and has twice been named to the NFL’s all-decade team.

So yeah, his word has a little bit of gravity around the league. Now he’s using it to speak out about what would be a major rule change.

Belichick’s Patriots sit at 5-4, just two games back of the AFC East-leading Buffalo Bills. New England had its bye week this past weekend, but the legendary head coach still met with members of the media on Monday. On top of discussing his team’s upcoming game against the New York Jets, Belichick addressed the wild ending to Sunday’s game between the Bills and Minnesota Vikings.

The Vikings walked away with a 33-30 overtime victory. But the Bills nearly won in regulation thanks to a sideline catch by Gabe Davis that the NFL later admitted should have been ruled incomplete. The play happened under two minutes to go in regulation, however, meaning Minnesota could not challenge.

“It was right in front of me,” he said. I didn’t think that was a catch. In that mode, that needs to be something that either is from up top [in the press box with the replay official], or possibly New York [at the replay center]. We didn’t get any clarification on that. I did ask.”

Belichick feels that shouldn’t be the case.

“Provided the team has a challenge, they should have the opportunity to challenge really any play. I’m on record on that,” Belichick said in his Monday videoconference.

In a Monday interview on sports radio WEEI, Belichick added: “There have been other examples of that, plays that have occurred in situations where teams couldn’t challenge because the rules prohibited [it].

“I get forward progress, and things like that, that you can’t challenge. I’m not talking about that. I’m saying not having the ability to challenge a play that could impact the outcome of the game — even calls like holding and pass interference and things like that — I don’t see why those plays can’t be reviewed [by a coach’s challenge].” – via ESPN

Given the weight of Belichick’s word, it wouldn’t be shocking to see the NFL Competition Committee address the rule in the offseason. But for now, it’s a flaw in the rules that could well cost teams big games.