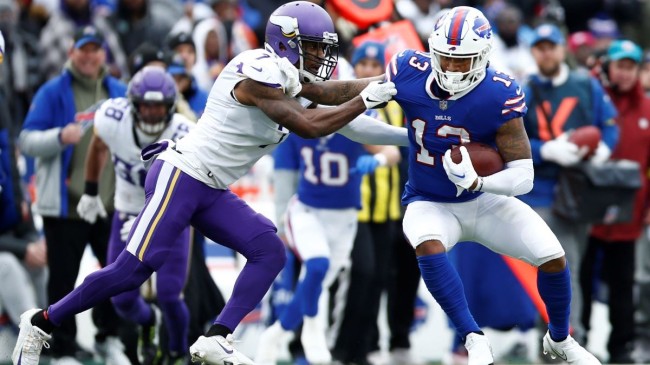 The Minnesota Vikings and Buffalo Bills had perhaps the game of the year in the NFL on Sunday. It featured big leads, huge momentum swings, one of the best catches you’ll ever see in your life and plenty of late-game drama.

The Vikings, somehow, came out with a 33-30 overtime victory to move to 8-1 and stay within touching distance of the Philadelphia Eagles for the top seed in the NFC. But it almost didn’t go down that way.

Not only did Minnesota trail Buffalo 27-10 late in the third quarter, but the Vikings also nearly lost a pair of times in regulation. The first came following a goal-line stand by the Bills before an improbable fumble put Minnesota ahead 30-27 with under a minute to play.

But the Bills’ offense is one of the best in the league for a reason. Josh Allen and company quickly marched down the field and into the red zone, looking to steal the victory in regulation. The drive was aided, however, by a miraculous sideline catch by wide receiver Gabe Davis. There was some confusion among the players and refs as to whether Davis actually secured the catch. But Buffalo got the next snap off before the play could be reviewed.

Now the NFL is admitting that the refs made a mistake and that the call should have been reviewed and overturned.

“It was a significant distance down the field,” NFL Senior VP of Officiating Walt Anderson said after the game, via NFL Media. “And even though it happens fast and Buffalo hurries to the line of scrimmage for the next play, if the replay official can’t confirm it was a catch on that long of a completed pass, we should stop play to ensure it is a catch.” – via CBS Sports

Instead, the referees ruled the play a catch. The Bills later kicked a game-tying field goal. And while Minnesota ultimately won the game, things could have been much uglier had they not.

It would’ve been a shame to see such a great game marred by such a clearly fixable call.