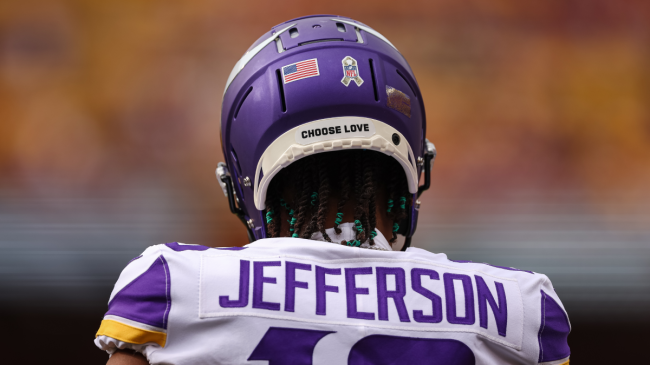 Justin Jefferson made the catch of the year in the game of the year during Minnesota’s stunning overtime win against Buffalo. The reception was so impressive that many fans around the NFL are debating where it ranks all-time.

The Vikings and Bills played an exciting, back and forth matchup on Sunday in what could potentially be a Super Bowl preview of NFL powers. Minnesota, who entered the contest at 7-1, overcame a two-score fourth-quarter deficit to shock Josh Allen and Co. and move into first place in the NFC playoff race.

Trailing 27-10 late in the third quarter, the players in purple outscored the Bills 20-3 over the final 16 minutes of action to force OT. Maybe more improbably, they battled back from a 10-point hole, scoring a pair of touchdowns in the final five minutes of regulation.

Now, it wasn’t exactly how the Vikings drew it up. Minnesota’s final score came on a fumble recovery in the endzone after Josh Allen mishandled a snap deep in his own territory. This, coming after the Vikings were stuffed on a fourth-and-goal play at the one-yard line.

That score gave Minnesota a lead with 40 seconds left in the game, though Buffalo would force overtime with a strong drive and successful field goal try as the final seconds ticked off the clock. The Vikings got the best of the Bills in that final session, eventually leaving with a 33-30 victory.

Lost in the shuffle of that incredible finish was an insane one-handed catch by Justin Jefferson. The reception has fans debating where it ranks all-time.

With Minnesota facing a fourth-and-18 on their final drive, Kirk Cousins heaved a prayer to his best pass catcher with the game on the line. Justin Jefferson hauled in a ridiculous catch to keep his team’s hopes alive.

Reaching up behind his body, Jefferson stole a pick away from a Buffalo defender, somehow gaining control with just his right hand. The snag kept the drive alive, which eventually set up the incredible finish.

Fans online immediately began to debate where the catch ranked on the all-time list.

NFL contributor Dov Kleiman called it the “greatest catch in NFL history,” while others said it ranked at least top three all-time. Check out what people had to say on Twitter after seeing the amazing reception.

That was one of the greatest catches in NFL history by Justin Jefferson.

NFL insider Ian Rapoport said, “I thought Julio Jones in the Super Bowl was the most acrobatic catch ever. Justin Jefferson would like a word.”

Colin Cowherd shared the opinion that it was possibly the greatest catch ever seen.

Many are saying it has officially surpassed OBJ’s incredible catch against the Cowboys in 2015.

That Justin Jefferson catch might have actually outdone Odell

We’ll let you be the judge on that. Whether you believe it’s the greatest catch of all-time or not, there’s no denying that it was an impressive feat. It will almost certainly go down as the best catch of 2022.