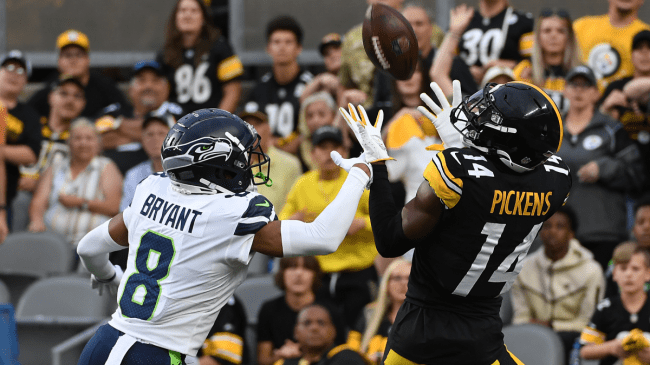 Pittsburgh Steeler fans have been begging the team to get first-round draft pick George Pickens more involved in the offense. The wideout has been MIA over the first two games of the year.

Through those first two Pittsburgh matchups, Pickens has been targeted just five times, hauling in two catches for 26 yards. Over the last week, the focus has been on getting him the ball.

Quarterback Mitch Trubisky said that finding No. 14 in black and gold will be a priority, and wouldn’t you know it, as soon as they threw the ball his way on Thursday night, he made a big play.

The Steelers are playing the Browns in Thursday night football, and the NFL world has officially been introduced to Geoge Pickens. The pass catcher made an incredible play on his first target of the game, hauling in an over the shoulder, one-handed grab in the red zone.

That catch set up a Pittsburgh touchdown.

Take a look at what folks are saying about the ridiculous reception on social media.

NFL insider Ari Meirov posted the video along with the caption, “George Pickens, Holy Smokes,” in response to the catch.

Talk show host and former NFL punter Pat McAfee said, “George Pickens is always open,” noting that even when he’s covered, he has the ability to make a difficult catch in traffic.

GEORGE PICKENS WHAT A CATCH 🤯

While Field Yates said, “Every play George Pickens has been involved in so far in the NFL has been highlight reel worthy.”

Every play George Pickens has been involved in so far in the NFL has been highlight reel worthy.

Incredible catch by the rookie.