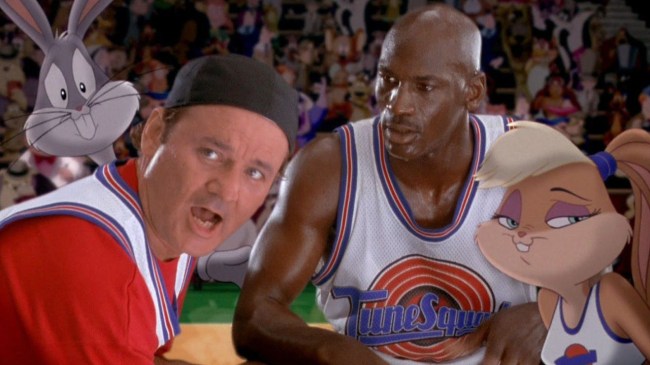 It’s likely there’s nothing Rudy Gobert will be able to do over the course of the remainder of his career that will result in him being primarily remembered for anything other than being the patient zero who served as the catalyst for the spate of cancelations that saw the world of sports come to a virtual halt back in March—unless he can figure out how to do what the group responsible for what was previously the biggest health scare the NBA had ever seen did to bring the league to a standstill back in the ’90s.

Gobert is certainly a solid player but the only way he’ll be able to become a superstar is if he finds himself in possession of a basketball capable of sucking away the talent of the NBA’s best players like the aliens in Space Jam used to transform into the Monstars.

Thanks to the Nerdlucks, Charles Barkley, Patrick Ewing, Larry Johnson, Muggsy Bogues, and Shawn Bradley all found themselves in the hospital as doctors tried to figure out why they all suddenly sucked at basketball and the league suspended the season for the safety of the rest of its players.

Of course, the NBA was still reeling from the hit it had recently taken after Michael Jordan suddenly announced he was retiring so he could pursue a career in professional baseball while golfing with Larry Bird and Bill Murray in his spare time.

As a result, Jordan was lucky enough to not befall the same fate as those other guys, and as we all know, he famously helped Bugs Bunny and the rest of the TuneSquad avoid becoming slaves at Danny DeVito’s theme park for eternity by leading them to one of the most thrilling and unlikely victories the world has ever seen.

Down 66-18 at halftime, Jordan and Co. managed to mount an insane comeback that was capped off when he took advantage of the fact that the laws of physics are nonexistent in the cartoon universe he was transported to and stretched his arm to an otherwise impossible length to win the game at the buzzer.

Jordan is understandably viewed as the hero, but as Bill Murray wants us all to remember, he didn’t win the game all by himself.

The actor—who is currently gearing up for a nacho showdown with Guy FIeri—reminded people he played a pretty instrumental role after he joined the TuneSquad on the floor for the final play of the game while reflecting on the movie from a bathtub on Jimmy Kimmel Live.

Here’s what he had to say about being underappreciated:

“People forget that I got the assist on the game-winning basket. So easily forgotten. I stole the ball. I made the pass. I got nothing. I wasn’t even interviewed after.”

I had to go back and watch the closing seconds to see if Murray had a point, and after doing so, it’s hard to deny he does. The play doesn’t happen if he doesn’t pick up the ball that came loose when Daffy Duck committed what was at least a Flagrant 1 and then went on to make a couple of flashy passes to set up MJ for eternal glory.

Murray also said he, Jordan, and Bird used to regularly kill time during filming by playing a few holes of golf with each other during breaks, which you know had to make Wayne Knight feel a little left out.

Space Jam 2 is set to be released next July, and while it’s unclear if Murray is involved in that production as well, they’re making a huge mistake if they don’t recruit his services once again.