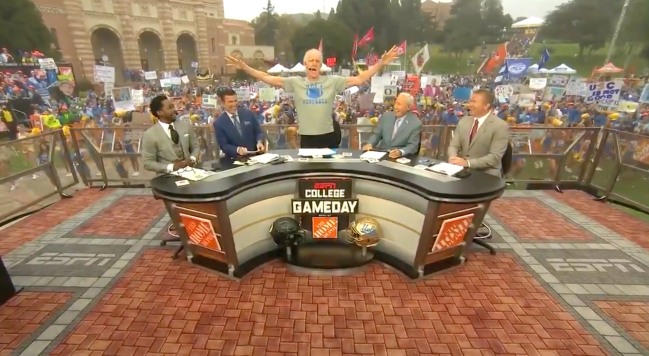 Bill Walton is a national treasure. As college basketball season quickly approaches, it’s that time of year again where Big-Head Red gets his chance to shine on the call for ESPN.

However, this year, we got an extra dose of Walton as a treat.

College Gameday traveled to Westwood, Los Angeles for the first time in history on Saturday for a game between UCLA and Oregon. As the production crew started to think about who to bring on as the show’s guest picker earlier in the week, the answer was obvious.

How could it be anyone other than Walton?!

The Bruin legend and two-time NBA champion joined Rece Davis, Lee Corso, Kirk Herbstreit and Desmond Howard on the desk and it made for complete chaos. It was amazing.

“Have you ever seen a bear fight a duck?”

Things got off to a fast start when Davis mentioned that he needed to pause the discussion for a sponsor plug. When he went on to talk about Coors Light, Walton said that he wanted one.

Bill Walton was the guest picker on Gameday today and if you’re a Walton fan, it certainly delivered.

Walton then went on a wild tangent in which he threatened to slap everyone on the desk.

When it was time to make his picks, Walton chose Washington State to beat BYU and expressed his love for Cougars.

He also shared a special moment with Chris Fallica.

If I do nothing else in life, at least I can say I’ve growled like a bear back and forth with Bill Walton.

As the desk went to make their picks on the Alabama game, Walton called out the Crimson Tide and challenged them to play UCLA.

“Does Alabama play road games? How bout they come to the Rose Bowl, the conference of champions?” Bill Walton is a legend 😂

And if anyone was to question Walton’s love for the “Conference of Champions,” don’t.

Bill Walton was the only pick for #USC on Gameday (and the #UCLA crowd boo'd him).

To finish off his incredible Gameday appearance, Walton sealed it with a kiss. Literally.

Corso chose the Bruins to beat Oregon and Walton kissed him on the (mascot) head.

And gets a kiss from Bill Walton 😂 pic.twitter.com/WSaD011jwT

Walton’s time on Gameday really could not have been more entertaining television. Just a few more weeks before he and Dave Pasch are back on the mic!