NFL Fans Are Imagining How Unhinged A Bills-Eagles Super Bowl Would Be: ‘Our Nation Doesn’t Possess The Infrastructure’ 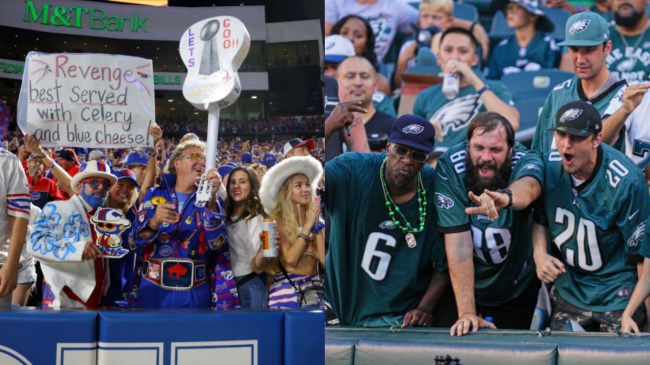 Following a pair of dominant performances from the Buffalo Bills (the preseason favorite to win the Super Bowl) and the Philadelphia Eagles (with a roster some analysts consider to be amongst the best in the league), NFL fans have already let their minds wander to the Super Bowl and imagine what a Bills-Eagles tailgate would look like.

Bills and Eagles fans tailgating before the Super Bowl pic.twitter.com/NfJnuxUH5M

Bills/Eagles is gonna be one crazy Super Bowl

society when we have an Eagles-Bills Super Bowl in February: pic.twitter.com/sVlULJYF5E

An Eagles vs. Bills Super Bowl would be so horrendously toxic and beautiful it would literally break the foundation of the Earth and sink an entire state like Beleriand after the War of Wrath in The Silmarillion

The Bills were the betting favorites heading into the 2022 season with odds of about +650. Given their utter dominance in the first two weeks of the season, though, those odds have since been slashed to +400.

As for the Jalen Hurts-led Philadelphia Eagles, while they began the season with middle-of-the-pack odds of +2000, they now find themselves in the top four with odds of +1200, trailing only the Bills, Chiefs, and Bucs.

All of this is a long way of saying that, if Vegas’ odds are any indication, an assuredly wild Bills vs. Eagles Super Bowl is certainly a realistic possibility, especially if the two teams continue to perform at this level.

The Bills will look to continue their incredible start to the season on Sunday against the 2-0 Miami Dolphins in what should be a wildly entertaining game. AS for the Philadelphia Eagles, they’ll be heading down south to take on one of their NFC East rivals, the Washington Commanders. Both games are at 1 p.m. on the 25th.

RELATED: This Insane Stat Might Prove That Josh Allen And Stefon Diggs Are The Best QB-WR Duo In NFL History