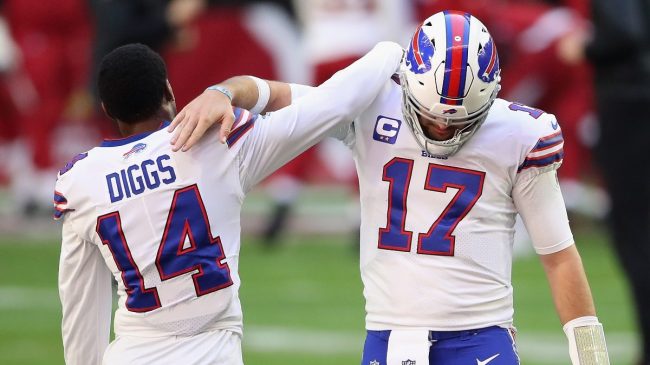 The Buffalo Bills have gone ballistic in their first two games of the season. Right now, they look absolutely unbeatable. Much of that has to do with the superstar duo of Josh Allen and Stefon Diggs. After lighting up the Tennessee Titans on primetime, it turns out that these two might just be the best QB-WR duo in NFL history.

Josh Allen And Stefon Diggs Have A Special Connection

After connecting on three touchdowns on Monday Night Football, Josh Allen and Stefon Diggs broke a unique record. Allen has thrown 10 touchdowns to Diggs in primetime games since 2020. According to ESPN Stats & Info, that’s the most in league history.

Since Stefon Diggs joined the Bills in 2020, he and Josh Allen have connected for 10 touchdowns in primetime games.

That's the most of any QB-WR duo over that span. pic.twitter.com/PPDBeZqQAE

The NFL has had its fair share of legendary QB-WR duos. Tom Brady and Randy Moss, Joe Montana and Jerry Rice, Peyton Manning and Marvin Harrison are a few strong examples. However, Josh Allen and Stefon Diggs are starting to put their names into the hat.

With monster performance after monster performance, these two are on a path to making history this year. The Bills have all of the momentum in the world this season and the offense doesn’t look like it’s slowing down anytime soon. Especially with Josh Allen under center, who is arguably the best quarterback in the league.

These two are still relatively young as well. Allen is only 26 years old while Diggs is 28. Additionally, Stefon Diggs is locked in on his contract until 2028. That means we’re going to be watching the Josh Allen-Stefon Diggs show for years to come.