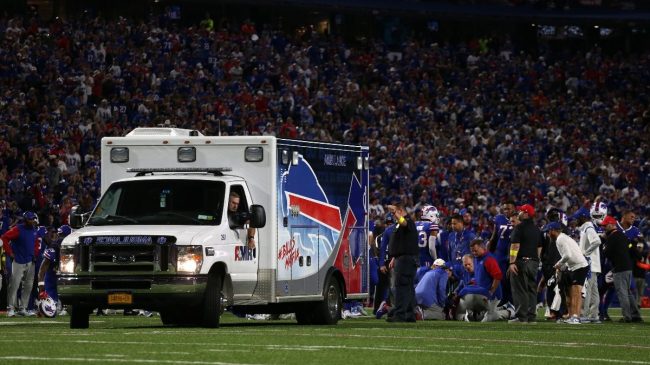 The Buffalo Bills routed the Tennessee Titans on Monday Night Football. However, many were left concerned about cornerback Dane Jackson after he left the game in an ambulance. It was a scary moment, as the collision looked incredibly scary. Now, there is an official update on Jackson and it sounds like good news.

Bills CB Dane Jackson Has Full Movement In His Extremities

According to ESPN, the Bills claim Dane Jackson “has full movement in his extremities” after “getting a CT scan and an X-ray at Erie County Medical Center.” Considering how serious the injury could have been, this is fantastic news for Jackson. It’s unclear when he’ll return to the field, if at all. So for now, we’ll have to wait for further updates.

Tremaine Edmunds accidentally hit Dane Jackson during the game. He was attempting to tackle a Titans player but ended up hitting his own teammate instead. The Bills defender states, “Definitely a tough play. Just kind of saw the receiver still up, just trying to finish the play. A situation that obviously, I didn’t do intentionally. I would never try to do something like that to my teammate,” per ESPN.

NFL and Bills fans alike have been monitoring the situation closely, hoping for any good news in the injury update. As you could expect, everyone is just glad that Jackson didn’t suffer anything too serious.

This is great news.

Everyone is just glad to hear the Bills cornerback is okay.

Things we love to see

Lucily, it sounds like Dane Jackson is going to be just fine after all. Mike Garafolo confirms that the Bills cornerback walked out of the hospital and is now at home. This is the best possible scenario for Jackson. So it’s nice to hear he’s doing just fine.

From @gmfb: Great news on #Bills CB Dane Jackson. He’s home after walking out of the hospital last night following that scary scene on the field in the game against the #Titans. pic.twitter.com/YFfvxsWsGm

It’s still unclear how much time Jackson will miss. However, the fact he was able to walk out of the hospital and avoided anything serious is great news and we’re all about it!