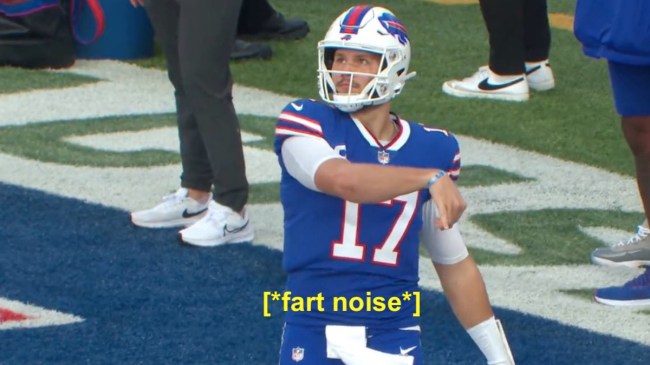 Given how many programs he appears on — First Take, Get Up!, NFL Live, and SportsCenter, just to name a few — it’s clear that former Detroit Lions quarterback Dan Orlovsky is one of ESPN’s fastest rising NFL-related talents. As he should be, too: Orlovsky is energetic, informative, humorous, intelligent, and able to eloquently break down the sport’s most important position.

Unfortunately for Orlovsky, though, his in-the-booth skills perhaps aren’t as well refined as his studio skills — to be fair, though, he does also call college football games for the network — as he suffered from such a bad brain fart on Monday night that he literally made an audible farting noise (presumably with his mouth, we think) while stumbling through a pregame tidbit about Buffalo Bills quarterback Josh Allen.

Orlovsky shouldn’t worry, though, because A) it happens to everyone, B) he’s clearly an extremely talented NFL analyst, and C) literally nothing that happens on Monday Night Football broadcasts will ever be worse than the Booger McFarland and Joe Tessitore duo from a few years back.

The reason that Orlovsky found himself in the booth alongside Steve Levy and Louis Riddick is that there’s a Monday Night Football double header this week, with the Minnesota Vikings visiting the Philadelphia Eagles in addition to the matchup between the Bills and Tennessee Titans. Calling the Eagles-Vikings game will be ESPN’s glossy new duo of Troy Aikman and Joe Buck, who they poached from Fox Sports following 20 years at the network.

RELATED: Justin Jefferson Can’t Help But Laugh At Adam Thielen’s Attempt At the Griddy Ahead Of Vikings-Eagles Game