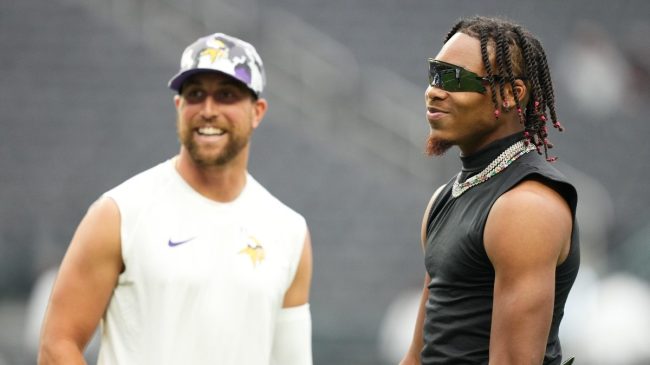 The Minnesota Vikings are set to face off against the Philadelphia Eagles on Monday Night Football. It should be a great matchup, as both teams have generated a ton of hype. However, during the pregame warmups, Adam Thielen attempted the griddy and it had Justin Jefferson laughing hysterically.

Thielen made eye contact with the camera as he hit the griddy out of nowhere. It didn’t look all that bad, as we’ve certainly seen worse versions of it. Just look up Mike Gesicki’s attempt after scoring a touchdown on Sunday. Regardless, the camera pans over to Justin Jefferson where he can’t help but bust out in laughter.

It was kind of like an episode of The Office. One player doing something out of the norm, pan to another player reacting to the situation. That’s basically right out of the show’s script. At the very least, it looks like Justin Jefferson and the Vikings are loose for their matchup against the Eagles.

That might be needed as Minnesota faces a tough secondary in their Week 2 matchup. Although Philadelphia gave up plenty of yards against the Detroit Lions, many believe the Eagles have one of the best secondary’s in the league. Regardless, look for Justin Jefferson to light up the field on Monday night.

Much of the attention will likely be on Jefferson. So this might be a chance for Adam Thielen to get more involved.