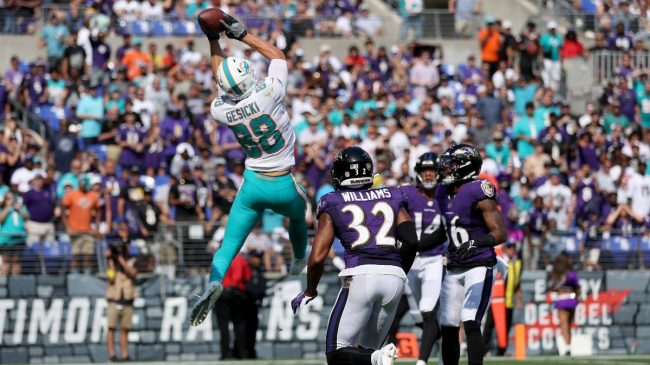 The Miami Dolphins won in a thriller against the Baltimore Ravens. Tua Tagovailoa went unconscious in the second half after throwing six total touchdowns. One of which was to his tight end, Mike Gesicki, who hit the griddy for his touchdown celebration. However, it looked a bit odd and now he’s hilariously defending himself.

It’s not nearly as bad as Adam Schefter’s but Gesiki basically keeps running while hunched over. He looks absolutely nothing like Justin Jefferson when he does it. But hey, we appreciate the Dolphins’ tight end for giving it his all.

Mike Gesicki hit social media soon after the game, as social media was roasting him for his touchdown celebration. In the end, he seems to be in on the fun with his hilarious response to it all.

Man, it looked so much better in my room in front of the mirror. Back to work tonight when I get home. https://t.co/oEPJ74Hwls

Perhaps some more practice will do him some good. Maybe he should consider calling up Justin Jefferson for some pointers. Either way, the Dolphins likely won’t mind his weird version of the griddy as long as the touchdowns keep coming.

At the end of the day, the Dolphins tight end can celebrate however he wants. He made an incredibly acrobatic catch to reel in Miami’s second score of the day. Gesicki played well for the most part and helped his team secure a massive comeback win over the Ravens.