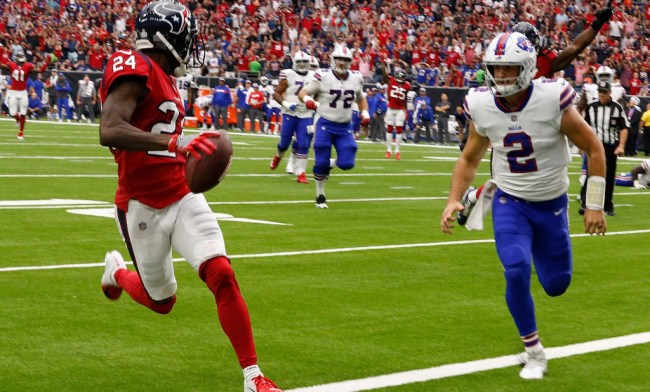 Things have gotten so bad in Buffalo that Bills fans are now voluntarily putting money into a GoFundMe account that was created to pay second-year quarterback Nathan Peterman to retire from the NFL. Forever.

That sort of thing happens when your team is 2-7 and averaging just 10.7 points and 151 yards passing per game after nine contests.

Not that there are a lot of other options in Buffalo. When your quarterback depth chart reads: Josh Allen, Derek Anderson, Nathan Peterman, Matt Barkley, and, why the hell not, Terrelle Pryor, there isn’t a lot of hope on the horizon.

Hard to believe. given their current situation, that at various points in 2018 the Bills had Tyrod Taylor under contract, and then A.J. McCarron, who they signed a two-year, $10 million contract in the offseason, and the team traded them both.

Or… that the Bills were so enamored with Nathan Peterman that he was named the team’s opening day quarterback.

(They weren’t the only ones.)

The GoFundMe started by Bills fans, named “Nathan Peterman Please Retire,” has this message for potential investors: “Nathan Peterman, we understand your passion to play football and especially in the NFL. But please for the love of God retire and leave and never come back. WE WILL GIVE YOU MONEY, JUST LEAVE!”

Understandable feelings when you look at Peterman’s stat-line so far this year which includes a completion percentage of 40.6, a yards per pass average of 3.4, a quarterback rating of 20.8 and the fact that he is averaging one interception for every nine passes he’s thrown so far in his two seasons with the Bills.

So far, the GoFundMe has raised $232 of their $1 million goal as of this writing, so, unfortunately for Bills fans, it’s not looking good for a fan buyout to happen.

On the plus side, former Bills QB E.J. Manuel says he’s more than ready to take over the reigns again.