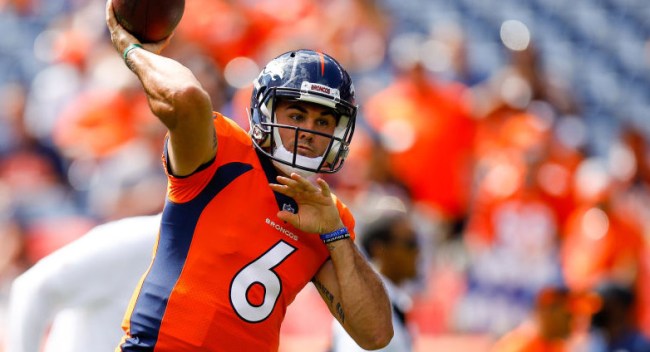 Broncos backup quarterback Chad Kelly’s road to the starting job in Denver just took a major wrong turn as he was arrested in Colorado Tuesday morning around one o’clock in the morning.

24-year-old Kelly, whose uncle is Hall of Fame quarterback Jim Kelly, was arrested for the second time since 2014 (he was previously arrested for getting into a fight at a Buffalo nightclub), and charged with first-degree criminal trespass after reportedly attending a players-only Halloween party (more on that in a moment).

The arrest report is as disturbing as it is bizarre.

According to an arrest affidavit, one of the homeowners, a woman, was sitting on a couch just inside the front door while holding her young child when Kelly entered uninvited and sat down next to her, mumbling incoherently.

The woman called for a second resident, a man, who confronted Kelly and hit him with an aluminum vacuum tube with plastic ends in the upper back as he kicked Kelly out of the house.

Officers began to search the area after reviewing security video of the front of the house that showed a man wearing dark pants, a white long-sleeve shirt with a brown vest and a red scarf around his neck.

His clothing appeared to be disheveled, police said.

A man matching the description was found inside a black SUV in front of the Gothic Theatre on South Broadway not far from the residence.

The man was detained without incident and he identified himself to officers as Kelly.

The male homeowner was brought to the Gothic Theatre where he positively identified Kelly as the man who entered the residence uninvited.

Kelly, who was also dismissed from the Clemson football team back in 2014 for “conduct detrimental to the team,” reportedly did not have any alcohol in his system, according to police.

The Gothic Theatre also just happened to be the site of a players-only Halloween party thrown by Kelly’s teammate Von Miller. A party in which multiple Broncos players were wearing cocaine-themed costumes.

In a video posted to Instagram and reported by TMZ, linebacker Brandon Marshall is seen dressed up as Bobby Brown, complete with a gold chain and a bag of “cocaine,” while wide receiver Emmanuel Sanders also appears in a video with white powder on his face.

The Broncos have released a statement about Kelly’s arrest, which read, “We are disappointed that Chad Kelly was arrested early this morning. Our organization has been in contact with Chad, and we are in the process of gathering more information.”

Chad Kelly has a history of trespassing.