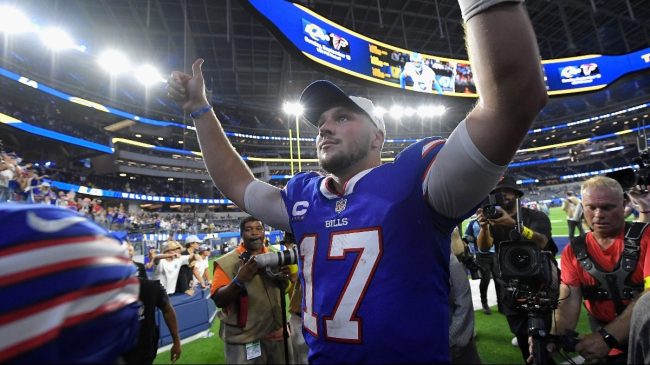 Josh Allen isn’t just a superstar quarterback for the Buffalo Bills, but he also is a recurring guest on Kyle Brandt’s Basement. It’s given Allen a nice platform to express himself, similar to some professional athletes having their own podcasts. However, fans were allowed to ask him some questions and the star quarterback delivered the perfect response.

Anytime a quarterback takes off running fans cringe a little bit. Especially when he’s a superstar-caliber player like Josh Allen. During the Bills’ season opener against the LA Rams, Allen was seen running the ball late in the fourth quarter while the team was up by 20+ points.

One fan had a specific question for Josh Allen on Kyle Brandt’s Basement. She asked, “Is it necessary for you to run in the fourth quarter when you’re up 20+ points? Can you please stop? From an anxiety-ridden Bills fan with PTSD.” Here’s Allen’s response.

"Absolutely not, it's not necessary. But it's football." – @JoshAllenQB on running the ball in the 4th when the Bills were up 20+ points. pic.twitter.com/jpMJT1YF3D

“It’s football.” That might be the perfect answer to any question thrown his way about his running abilities. It’s not like Josh Allen is a twig either. The guy is built like a freight train as he’s one of the largest people on the field at all times. We understand some Bills fans’ concerns though, as one wrong hit could cause a detrimental injury.

However, Buffalo’s offense thrives when Allen takes command. Not only is he the star quarterback, but he’s also the best rusher on the team. The running back room is rather mediocre and when it comes down to it, the Bills are better off running the ball with Josh Allen.